There are many similarities between the photographic and the printing industries. For an obvious start, both have been hard-hit by the digital revolution’s impact on the need to print. 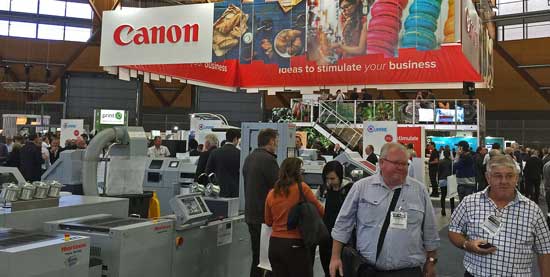 And both have faced other similar challenges in recent years: the impact of big specialists gobbling up smaller specialists; new player excursions into traditional specialist markets, such as minilabs into photo specialty and instant print shops into traditional printers’ territory. Add to this the incursions into both industries from would-be category killers, such as Harvey Norman and Officeworks, and you start to see how both industries have had similar uphill battles.

So it was interesting to see how long-established shows such as Printex and its exhibiting partner show, Visual Impact were facing up to the challenges of creating a trade show that would stimulate its side of the print industry. On day two of their exhibition this week at Sydney’s Olympic Park (a pig of a place to visit on the city’s outskirts), they appear to be doing admirably well. 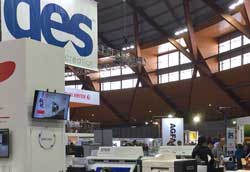 Day two had a healthy attendance of strictly trade visitors wandering stands bearing names very familiar to our own former Photo & Imaging Shows. It was almost nostalgic to see brands such as Konica Minolta, Agfa, Kodak, DES, Starleaton, Photo Electronic Services, Durst, Ricoh, Hewlett Packard, DES, Epson, Celmac, Fuji Zerox and of course, the giant Canon stand. Indeed, ‘our’ traditional trade show exhibitors were taking up nearly 30 percent of the exhibition area. Obviously, these companies, which helped to make up more than 100 exhibitors in total, still value the concept of business-to-business communication, and have not sought to abandon it. As far as the print industry is concerned, anyway.

Free seminars on business management skills were being run in theatres around the show floor. It was like Old Times Week! As one exhibitor explained to me: ‘In our business, we are totally dependent on our retailers and business partners closing the sales to the ultimate consumer. We are very proud of our technology, but that alone is just not good enough. Without a strong business partner connection, we are just not in the business.’

The show organisers are not into bragging about attendance. They say trade shows are not a numbers game. But they are hoping for around 8000-10,000 visitors to the event – a not too dissimilar figure to our own show’s previous attendance of trade visitors, including pro photographers.

The exhibition organisers think they have a good formulae and are not planning any drastic changes in direction.
– Paul Curtis