Although it’s unconfirmed, one reliable source indicated to PhotoCounter that the closure of Photo Continental was more of a considered business decision than recent high-profile store closures, in which administrators have been called in.

Photo Continental will hold a clearance sale of stock via its website.

‘It’s not a bankruptcy under any circumstances,’ the source told PhotoCounter.

(We hope to be able to add more background on the business closure when we have a chance to speak with Photo Continental general manager, Mark Schleicher.) 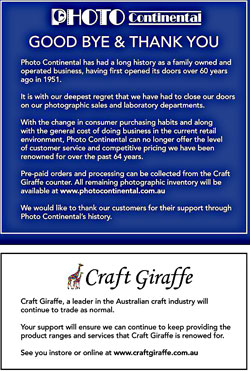 The Photo Continental website currently announces: Photo Continental has had a long history as a family-owned and operated business, having first opened its doors over 60 years ago in 1951.
It is with deep regret that we have had to close our doors on our photographic sales and laboratory departments.
With the change in consumer purchasing habits and along with the general cost of doing business in the current retail environment, Photo Continental can no longer offer the level of customer service and competitive pricing we have been renowned for over the past 64 years…

Craft Giraffe, the craft/scrapbooking branch of Photo Continental, will continue as a standalone business.

At the start of 2015 Photo Continental announced it would be ‘limiting our exposure to the digital hardware market.’

‘While we will still have access to a wide range of digital SLRs, compacts and lenses – we will be limiting the quantities we hold in store,’ Photo Continental explained on its Facebook page, focussing instead on ‘paper, chemistry and film along with a solid range of must-have accessories.’

Prior to this move the craft retail section had been separated under the new banner and Craft Giraffe name in 2014.

Photo Continental was a pioneer in mail order retailing of camera gear, and one of the original camera discount stores. It also had a strong presence in the second hand camera gear market for several decades.

Photo Continental established a minilab business in 1988 and was one of the few outlets in Queensland to continue offering a full photo printing service, covering B&W and colour neg film.

The valuable Photo Continental building on Logan Road, Mt Gravatt (about 15 minutes south-east of the Brisbane CBD), was, at more than 2800sq m, described as the largest physical camera shop in the southern hemisphere.

Reaction of customers on Facebook was remarkable, with around 100 postings in less than 24 hours expressing regret at the loss of the clearly highly-regarded supplier.

Here are a couple of typical contributions:
‘Such as shame,’ wrote Chris Wruck. ‘I bought my first photography equipment from Photo Continental in the early 1970’s as a young boy with a love of photography, back in the days when you were in Adelaide Street in the CBD. I set up a complete black and white processing lab in my parents downstairs rumpus room which I completely took over with my Durst enlarger and darkroom equipment.
‘You guys were always the best in town and I have always purchased the bulk of my equipment from you to support our local businesses. Now, many year on and as a professional photographer, I am really saddened at this loss. To the many staff who have helped me over the years, thank you. I am truely stunned that the end of this era has come. Best wishes to all the team for your future. God bless.’

Former Kodak service technician George Mosel wrote: ‘I was a service provider in my Kodak days and a customer in my private life. Sad to see the end of what was once the biggest photographic and photo frame supplier in Brisbane. For a long time, pricing was keener than online+freight and it was always in stock. I bought my first DSLR there and of course the lenses, accessories, flash guns, tripods and the list goes on… Your service was always professional and courteous, knowledgeable and friendly. The end of an era, to be sure.’