JA Davey has taken on distribution of the Australian-designed and manufactured Atom photo booth from Red Robot Industries.

Red Robot is a local tech start-up which claims the title of the largest photo booth manufacturer in the Southern Hemisphere. The Atom photo booth differs from others in the market in being far more portable. It folds in on itself to be transported in a car boot or hatch (65x48x52cm) and can be set up in less than three minutes. Weight is 46Kgs.

The all-metal Atom Photo booth combines a PC unit with a DNP printer, a high-res webcam and a 17-inch hardened touchscreen to produce prints at around 16 cents for 1x4x6 or two 2x6s, which JA Davey and Red Robot claims is ‘unbeatable’ in photo booth consumables costs.

It includes greenscreen backgrounds, social networking and video messaging features, and an optional Inflatable enclosure with a 2.5m square footprint is available.

Since 2009 the number of photo booth companies in Australia has more than doubled, according to Red Robot, which claims on its website that ‘the demand for this fun new craze is not even close to being met’ so that in peak times, such as the wedding and Christmas party season, photo booth companies are fully booked.

Photo retailers seem to be ‘hidden in plain site’ when it comes to the photo booth market, with party hire companies, DJs and wedding photographers being targetted as prospective customers. 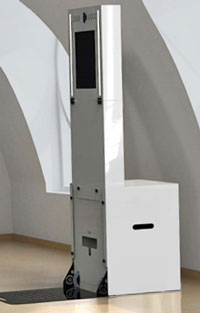 But an in-store photo booth with a footprint of around 50x50cm, performing as both a ‘selfie station’ and an eye-level digital signage unit, always on display to customers and available for hire, could well be worth considering as an addition to a photo retailer’s offerings.

‘We have had discussions with certain operators that vision these within a retail store. This comes from a marketing perspective making use of the units social media application,’ said Jon McBriar.

‘Predominately booth products are used by event photographers at weddings or for corporate events,’he said.

Photo booths are generally hired out for between $750-1100 for a three-hour period, according to Jon McBriar, and this generally includes an attendant. Prints are covered by the hire fee. Red Robot states the average throughput during a hiring session is around 300 prints.