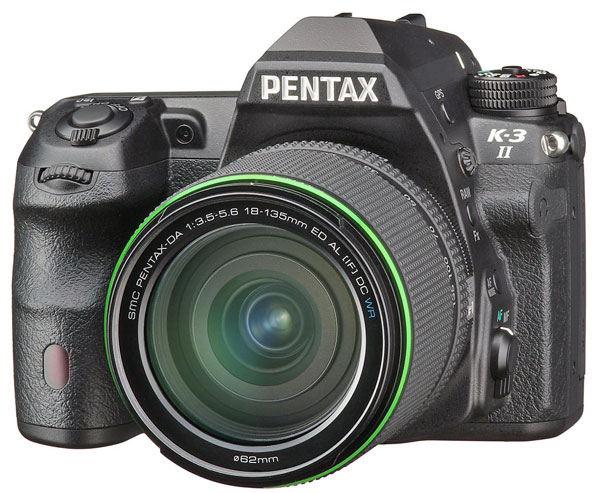 It has an 86,000-pixel RGB exposure meter and a 27-points AF module with 25 cross points. High speed continuous shooting is at up to 8.3 frames per second.

It features an APS-C format 24-megapixel sensor. The camera also incorporates a GPS module allowing accurate recording of shooting locations and simplified, high-precision tracking of celestial bodies, to eliminate the need for an optional GPS unit. The Astrotracer simplifies the tracking and photographing of celestial bodies by coupling GPS data with the camera’s SR mechanism. 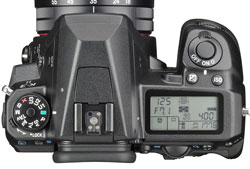 The K-3 II’s exterior casing is made of magnesium alloy. The inclusion of 92 sealing parts in the body provides dustproof, weather-resistant and cold-resistant construction, ensuring operation at temperatures as low as –10°C. The shutter unit has been built to withstand 200,000 shutter releases. The camera has a top panel for shooting information in addition to a 3.2inch LCD screen.

Other features include dual SD memory slots and a switchable AA filter simulator. Unlike an optical AA filter, which always creates an identical result, this simulator lets the user not only switch the anti-aliasing filter effect on and off, but also to adjust the level of the effect. This means that the ideal effect can be set for a particular scene or subject.

Pixel-shifting
The recently announced Olympus O-MD E-M5 Mark II was the first camera model with pixel shifting technology, rendering its 16-megapixel sensor capable of capturing 40-megapixel images. The Pentax K3 is different in that it uses the shake reduction system to shift the sensor by a single pixel, four times, and combine the images so that each pixel in the final photo has been shot with one red, one blue and two green filters over it.

It’s claimed this provides better colour accuracy and results in less image noise, since the camera gathers more data for each pixel, rather than filling in the missing colour data via  interpolation. So it creates a 24-megapixel image, but with ‘higher quality’ pixels.

It will only be effective when the camera is on a tripod and shooting a non-moving subject such as a still life, product shots, buildings or distant landscapes.

Gold Award
Enthusiast website DPReview has already put a production model K3 II through its paces, giving it a Gold Award and concluding it was ‘probably the best digital camera the company has ever made.’

‘Although the D300S is still nominally in Nikon’s lineup and Canon still offers the rather elderly EOS 7D,’ the review continued, ‘the K-3 is the only camera making significant strides in the high-end APS-C DSLR space.’