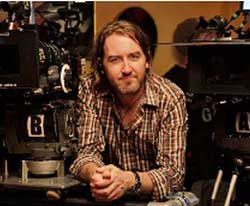 ‘I’ve been working with Olympus for the past few months on their new OM-D E-M5 Mark II camera,’ said John Brawley (pictured right), who has worked on productions such as as Puberty Blues, Offspring and Party Tricks. ‘It’s a signal of intent and it shows they are taking video seriously enough to make a Mirrorless Camera with such unique and compelling features, like their new-generation 5-axis image stabiliser, a more robust 77 Mbit/s All-I intra codec and the addition of the very important 24 and 25 fps frame rates.

‘The image stabiliser alone is astoundingly good and can be used with almost any lens. I can imagine using this in a TV drama environment to get shots that I wouldn’t be able to get any other way.’

‘Embarking on this partnership is exciting for Olympus,’ said Olympus marketing manager, Kristie Galea. ‘Last year we discovered John as a long-time Olympus user and supporter for the Micro Four Thirds system. John is a pioneer in his field who produces amazing work and with an affinity for the Olympus brand he was the natural fit for us to work with.’