Leading NZ retailer Donald Buckley Photo & Frame has thrown itself into a campaign to stop spending attrition and regain the loyalty and support of its community of Gore. 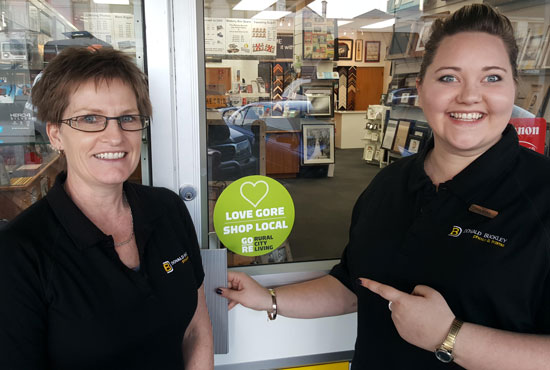 Donald Buckley Photo & Frame in Gore is getting behind a drive to encourage consumers to spend more with local retailers.

As part of the Gore District Council’s strategy to become New Zealand’s most commercially resilient provincial town, retailers there have launched an initiative to re-engage shoppers with local businesses.

‘Love Gore, Shop Local’ is a key element of the wider plan to get consumers considering stores in the township first, before a trip to nearby cities – or buying online.

Buckley’s recently received a wake-up call regarding the need to keep local businesses top of mind when a major new restaurant development sent thousands of dollars of picture framing outside the district – unaware that there were people in town who would have gladly handled the order.

The program focuses first on helping business adapt their range and offer to meet Gore’s needs and expectations. This includes in-depth analysis of products available, through to hours and service standards.

Businesses are working collaboratively to ensure changes and improvements are in place ahead of the busy summer season ahead. Plans include new weekend hours, alignment on late nights over Christmas, community e-commerce and a range of special shopping events.

‘Whilst the initiative focuses on consumers, we’re delighted that the concept has engaged the wider business community,’ said Lorraine Nicolson from strategists First Retail Group – who have been working with the local council.

Gore’s lead has inspired a number of other towns to revisit their retail strategy with similar initiatives under way throughout the country. A renewed focus from central government on the economic health of provincial New Zealand is predicted to see further projects such as this launch in the coming months.

Donald Buckley Photo & Frame has been operating for over 30 years and has two outlets on the south island of New Zealand – in Invercargill and Gore.