Nikon has announced a new Nikon 1 camera, the J5, will be in stores in Australia on April 23. 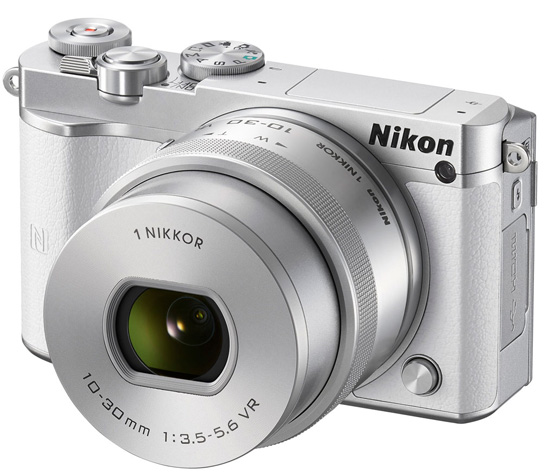 The new model has a 20.8-megapixel 1-inch (13.2×8.8mm) back-illuminated CMOS sensor and Expeed 5A image processor, and Nikon is claiming it will shoot bursts of 20 frames per second at full resolution with autofocus – but with no mention of the length of the burst. (It’s actually capable of bursts of 60fps ‘with AF fixed on the first frame’ – which we think means so long as there’s no movement during the burst.)

Whatever the case, the J5 leap-frogs the Samsung’s NX1’s 15fps (for 70 shots) continuous burst speed. (But with a lower resolution, smaller sensor.)

Another highlighted spec is 4K video resolution, but it can only manage this at 15 fps. Full HD at 60 fps, however, is probably a more relevant capability, as is 720p at 120 fps for slow-motion playback. 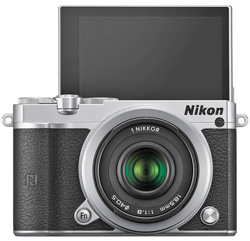 The J5 doesn’t sport an EVF but has a 3-inch 1,037k dot touch display that tilts at a 180-degree angle for selfie-friendly shooting.  There are a range of creative modes including ostalgic sepia, pop, retro, high-contrast monochrome, fisheye, skin softening and cross-screen.

It has a hand grip and faux leather trim to help handling, and weighs in at just 380 g with 10-30mm lens attached. Memory card format is microSD.

A time-lapse movie mode snaps up to 300 stills and replays them as a 10-second mini movie. Using an interval timer, up to 999 images at intervals spanning 5 seconds to 100 minutes that can be merged into a single video using desktop software.