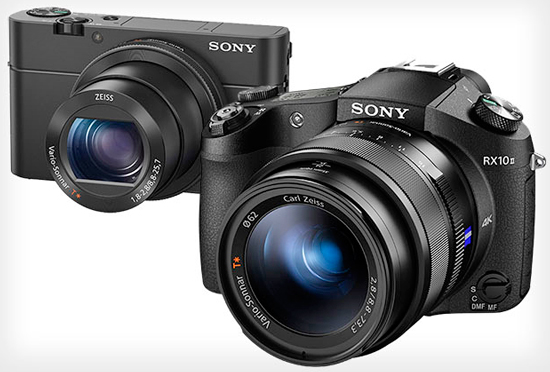 ‘Well, that must be a world first,’ I hear you mutter under your breath. Yes indeed!  And the type of world first it is, according to Sony, is ‘the world’s first 1.0 type stacked Exmor RS CMOS sensor with advanced signal processing and an attached DRAM memory chip.’

‘But what does this mean?’ I hear you wail in despair. Well, ‘stacked CMOS’ is the latest thing in CMOS technology. Unlike backside illuminated (BSI) sensor design (so 2014!) and older front-bottomed technology, stacked CMOS separates the photosensitive regions and the supporting circuitry into different layers, maximising the proportion of each pixel that can be light sensitive.  Apparently.

Sony’s engineers reckon the new sensor design is around five years ahead of anything else on the market, according to Amazon’s DPReview website.

Both cameras offer 40x super slow-mo video capture. Users can choose frame rates of 960 (at 1280×800), 480 (at 720p), and 240fps (at 1080p). A ‘start trigger’ feature lets you start a video 2 to 4 seconds before you actually press the trigger, capturing a moment that just happened as a slow motion video. (This feature seems to challenge the time-space continuum, but perhaps it’s just poorly-worded).

The new sensor allows for continuous shooting speeds of 16fps on the RX100 IV and 14fps on the RX10 II. The high-speed anti-distortion shutter enables sharp photos while shooting wide open and minimises ‘rolling shutter effect’.

The RX 10 II can capture 29 minutes of 4K video at a time, while the RX100 IV is limited to about 5 minutes. Both cameras offer Picture Profile, S-Log2/S-Gamut, and photo capture during 4K recording.

Finally, both cameras offer Wi-Fi and NFC connectivity for wireless data transfers.
The RX100 IV and RX10 II will be available in some parts of the world starting next month. Sony Australia has not provided local release details. US pricing is US$950 and $1300 respectively.