Independent Photo Supplies has announced the launch of the new Kodak Moments app in Australia and New Zealand, which will ultimately supercede the Kodak Kiosk Connect and Kodak Create apps.

Pictures can be edited and enhanced with tools and filters, posted to popular social media websites, or sent via text or email, all from within the new app.

Print options include printing in-store at a WiFi enabled Kodak kiosks – including the Kodak Tablet 100 kiosks –  or having orders shipped to their home.

The welcome addition of a Photo Gallery view from the main menu makes working within the app easier. The Kodak Moments apps also features a kiosk locator. 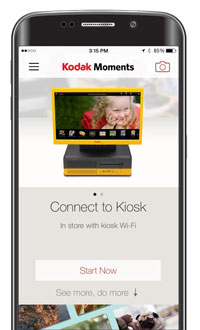 The new app incorporates the functions of both the Kiosk Connect and Create app, eliminating confusion by consumers about which app they should be using.

(The Connect and Create apps, along with another app called My Kodak Moments – as opposed to Kodak Moments – continue to be available among the Kodak Alaris stable of apps in the Google Play store.)

Kodak Picture Kiosk software upgrades to change the app references within the kiosk workflow from Kiosk Connect to Kodak Moments will not be available to Kodak Express stores until later this year.

In the meantime, kiosks that allow WiFi printing via the Kiosk Connect app will also recognise the new Kodak Moments app.

The current Kodak kiosk locator on the app for Australia and New Zealand does not include Kodak Express stores – only Officeworks and KMart outlets. Kodak Alaris is reported to be ‘working out’ how other retailers can be included.