GoPro has announced June release of a new Hero+LCD camera, featuring 1080p 60fps video, 8-megapixel stills and (you guessed it) an LCD screen.

The touchscreen display can be used for framing shots and settings control. The camera is built into its waterproof housing, which is operable to 40 metres. The new model also includes features like ‘HiLight Tagging’, which lets you mark key moments while recording and during playback so you can easily find them later, and ‘video trimming’, allowing creation of short clips in-camera for easier sharing without a computer. 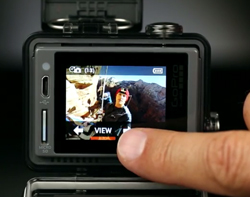 Wi-Fi and Bluetooth connect to GoPro App-enabled smartphones or tablets for easy camera control and shot preview when the camera is mounted or out of reach. The GoPro App also allows for easy content sharing to Instagram, Facebook, Twitter and more, and combines with the new in-camera video trimming feature to form a convenient content sharing solution.

It will be available for purchase in the US beginning June 7 at a suggested price of US$300. International availability will begin July 12.