Panasonic Australia has announced late June availability of the Lumix G7 mirrorless interchangeable camera, with a sharp, body-only RRP of $899. 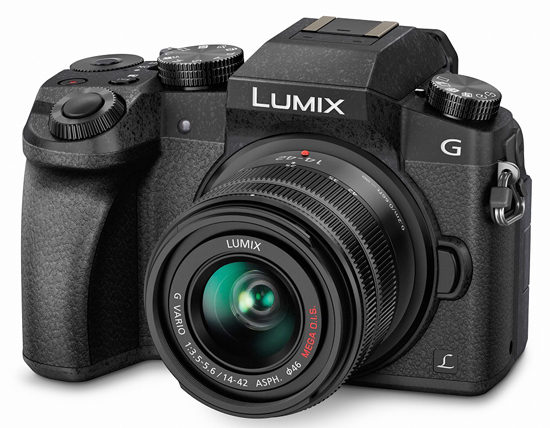 The camera features a 16-megapixel Live MOS Micro Four Thirds sensor and Venus Engine 9 image processor, ISO to 25,600, continuous shooting to 8fps with single-shot AF, as well as a trio of 30fps shooting rates based on the 4K UHD video recording.Top shutter speed is 1/16,000 sec.

Panasonic says the contrast-detection type autofocus performance has been improved in terms of both focusing speeds (0.07 sec) and subject tracking.

A built-in stereo microphone can be used during recordings, and features an integrated wind-cut filter. There is also a 3.5mm external microphone jack.

4K Photo Modes
Utilizing the 4K video recording capabilities, a trio of still shooting modes are available for recording continuous 8-megapixel stills at the 30fps shooting rate: continuously record 8-megapixel images at 30fps for up to 29 min. 59 sec; record 8 megapixel images at 30fps one second prior to and one second after pressing the shutter button, giving you 60 frames to choose from; playback your video, pause at the chosen moment, and use the shutter button to mark a chosen frame from the video and save it as a single 8-megapixel frame.

When using any of the 4K Photo modes, complete exposure control using the PSAM dial is available.

Front and rear dials provide direct aperture and shutter speed control, as well as quick changing of ISO and white balance settings. Six function buttons can be assigned to control a range of custom features and the main drive wheel offers fast switching between shooting modes, including the 4K Photo modes.

The G7 also features built-in Wi-Fi connectivity for wirelessly sharing images and remotely controlling the camera from a linked mobile device using the Panasonic Image App. Connection is simplified using a QR code system to pair the smartphone or tablet with the camera.