Kiwi retailers call it a day

Paul Farrow (Paul’s Camera Shop, Christchurch) and Simon and Shelley Burge (Nelson City Cameras, Nelson) with a combined 70-plus years in the photo industry, are both closing their doors this month. 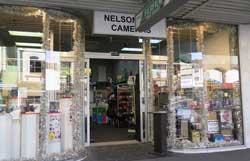 For Simon and Shelley, the immediate reason for the decision to call it a day is uncertainty about the store’s future, owing to more stringent post-earthquake building standards.

The store is on Nelson City Council’s earthquake-prone list and has until December 2019 to reach the new building standard. With uncertainty as to whether the building will be demolished or strengthened, the Burges decided it was time to wind things up.

But of course, the changing nature of photo retailing has also been a factor in the decisions. In an interview with the Nelson Mail, Simon Burge noted that photo printing volumes had fallen with the uptake of phones and tablets.

He said there was still a market for high-end cameras, but camera stores were becoming more of a niche business.

‘If you’re not making a reasonable profit then there is no point in continuing a business,’ he told the Mail. ‘We are not at that yet, but you must be careful that it doesn’t become that,’ he said. 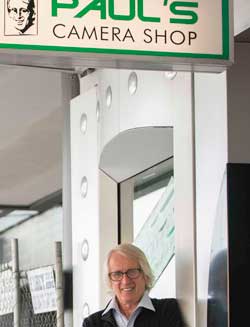 Paul Farrow is also ‘quitting while he is ahead’.

The store, which has been operating since 1962, and in 1979 became Pauls Camera Shop under his ownership, will close on March 20.

He has been in photo retailing for 36 years, including five years in Australia with Milversons in Sydney and Wollongong, and describes his time in the business as ‘an amazing ride’.

‘If you compare what we had in the store in 1979 to what we are stocking today…And now I’m marketing through the whole of New Zealand, not just locally – but even that strategy isn’t working any more.’

Paul hasn’t attempted to sell the store as a going concern because, ‘no-one would buy it’. He said another NZ camera store he knew of had been on the market for four years with no interest shown.

It’s a sunset industry, he said, and he wasn’t prepared to inject the capital required to maintain the business.

He said that parallel importing, the impact of smartphones and the resulting reduction in the  level of printing, and the ‘dramatic dip in the DSLR market’ contributed to the current difficult trading conditions.

By all accounts, Paul Farrow is a good, hard-working retailer, with a loyal customer following. He has an active website and Facebook page –  which attracted numerous complimentary and sympathetic comments from customers, suppliers and customers on his announcement of the decision to shut up shop.

It’s a sign of the changing times, however, that the Google ad which popped up at the top of the Paul’s Cameras Facebook page when PhotoCounter accessed it was ‘Buy Direct From Sony!’ – advertising a high-end accessory lens along with the price, and linking to the Sony online store.

– But it wasn’t Sony which Paul Farrow saw as, along with parallel imports, smartphones, etc, as part of the cause of the demise of the specialist photo retailer, but Canon.

‘The other big thing is Canon in NZ have [loaded] DSLRs into the CE stores. Canon, by attempting to keep its sales up, has undermined the market.’

He said the low prices for Canon’s entry level cameras has had a market-distorting impact across all brands of cameras.

Although Canon is the clear market leader in NZ as well as Australia, he saw the business as in a difficult situation.

‘Canon has missed boat in mirrorless, and now in survival mode has had to drop all its plasticky DSLRs like the 1200D into CE.’

He added that Paul’s had been scoring runs with mirrorless cameras. ‘We’ve had a huge success with Olympus and they’ve given us full support. Really appreciated.’

But Canon DSLRs at NZ$499 in the CE stores didn’t give specialists a look-in, he said. ‘We haven’t been able to get access to those those deals. Perhaps they are selling below cost. We’ll never know.

‘I’ve been a major supporter of the brand and had huge success in the past, but no longer.’