The worldwide market for interchangeable lens cameras and lenses is continuing to recover following June CIPA figures which for the first time in several years outstripped shipments from the same month last year.

Interchangeable lens camera shipments  for January-July are on par with January-July 2014, with growth accelerating: In July 2015 shipments were around 20 percent up on July 2014.

All that growth is in mirrorless cameras – DSLRs shipments were actually down slightly in unit terms.

Digital compacts continue to decline, with shipments for the first seven months of 2015 down to 80 percent of 2014 levels. Nonetheless the change towards interchangeables and high-end compacts in the mix of cameras sold sees the dollar value of camera shipments at around the same level as 2014, indicating an increase in overall average selling price.

Lens shipments are at around the same levels as Jan-July 2014, with an increase in dollar value, which seems to be driven by increased shipments of higher value 35mm format lenses.

Sony rides mirrorless wave
A top-level Sony Electronics US briefing to website The Imaging Resource reinforces the notion that sales growth is in mirrorless interchangeables. (And that Sony is doing pretty well out of this trend!) 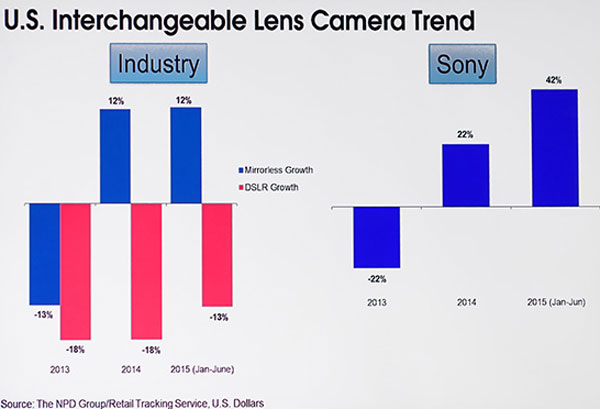 DSLRs sales in the US are way down over the past two years, while mirrorless interchangeables sales are growing – albeit from a lower base.

Figures from market research firm NPD show Sony as the top selling mirrorless camera maker in the US for four years running, according to Imaging Resource. For the first half of 2015, Sony’s ILC sales were up a massive 42 percent over 2014.