Fujifilm has announced late June availability of the X-T10 miirrorless interchangeable, at an RRP of $1299 with 16-50mm kit lens. 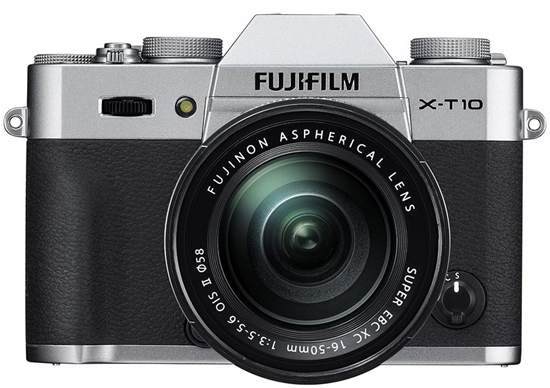 The new model has the same sensor as the popular X-T1 – an APS-C 16.3 megapixel X-Trans CMOS II sensor, with built-in phase detection AF. What it lacks is the X-T1’s weather sealed body.

Zone mode allows photographers to select a 3×3, 5×3 or 5×5 zone out of the 77-point AF area. During AF-C focus, the X-T10 continually tracks a subject positioned at the centre of the zone. The centrally positioned 3×3 and 5×3 zones, in particular, deliver fast focusing thanks to the on-sensor phase detection AF.

Wide/Tracking mode is a combination of the Wide mode (during AF-S), whereby the camera automatically identifies and tracks the focus area across the 77-point AF area, and the predictive Tracking mode (during AF-C) which uses the entire 77-point area to continue tracking a subject and enables continuous focus on a subject that is moving up and down, left or right or closer and further from the camera.

The Single Point mode divides the focus area into smaller sections to accurately determine the distance to the subject for greater focusing precision. Phase detection AF works at high speed even in low light conditions or on a low contrast subject.

The X-T10 viewfinder features a high definition 2.36 million dot display, and a time lag of 0.0052 seconds. It can be set to the ‘Preview Pic Effect’ to reflect shooting conditions and offer a natural view close to what is seen by the naked eye.

The viewfinder’s eye sensor will automatically orientate the information when the camera is positioned vertically – not possible with optical viewfinders.

Fujifilm claims the camera starts up in 0.05 seconds, has a shutter time lag of 0.05 seconds and shooting interval of 0.5 seconds (when not in continuous shooting mode).

The top and base plates on the X-T10 are lightweight, die-cast magnesium. The top plate features three precision-milled aluminium dials that allow photographers to adjust the combination of aperture, shutter speed and shooting functions. The back panel has a three-inch 920K-dot tilting LCD monitor suitable for shooting above the head as well as close to the ground.

Other features include a Multiple Exposure function, Advanced SR Auto mode, interval timer shooting, a silent electronic shutter that is capable of exposures up to 1/32,000 seconds, Digital Split Image for precise manual focusing, and Focus Peaking which highlights high-contrast areas.

The X-T10 can shoot HD movies at 60 frames per second (fps) along with 50fps, 30fps, 25 fps and 24fps movies. Movies can also be shot with Film Simulation modes, high speed and high precision focusing, six types of scene recognition functions, and a high bit rate of 36Mbps.

Manual exposure can also be set during movie shooting. Aperture, shutter speed and ISO sensitivity can be changed to suit the photographer’s preferences.

Photos and videos can be sent to smartphones, and in-camera files can be browsed, selected and imported using a smartphone. Photos can also be sent directly from the X-T10 to an Instax Smartphone Printer for instant prints.

Wi-Fi Transfer is supported, enabling wireless backup of the data to a computer.

It weighs 540 grams, has wide (f2) maximum aperture, and a minimum working distance of 60cm.

Construction is 11 elements in eight groups (including three ED glass elements) minimizing vignetting. The diaphragm is rounded to improve bokeh.

Weather and dust resistance is courtesy of seven seals on the lens barrel that protect it from rain, dust and splashes of water when shooting outdoors. The lens can also tolerate temperatures as low as -10°C.