The doors are closing on Watt’s Camera Centre, Burnie, ending an venerable 105-year history of photo retailing from the current Wilson Street location and its antecedents. 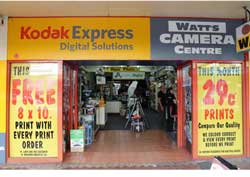 Rob and Robyn Watt took over the store from Colin Winter, whose family had operated photo stores in Burnie for three generations.

The Watt’s decision to close the store was made more for personal reasons than financial: Moving back to New Zealand to be with family: ‘We have five adult kids and none of them are in Tassie, and five grandkids with another on the way,’ explained Rob Watt.

Initially Colin Winter was simply going to close what he said was the oldest camera store in Australia, until Rob and Robyn made a last-minute offer to take over the business.

Since then they have worked tirelessly to make a success of the business. Photo Counter ran a feature on the store almost exactly 12 months ago, and at that stage Watts Camera Centre was doing everything that the pundits advise to survive in 21st century photo retailing: they ran photo classes; they opened a portrait studio and even a photo gallery; they promoted film processing; they started a photo booth event photography business; they expanded in-store services and reduced outsourcing; they harnessed Rob’s experience in advertising sales to get good bang for the buck in promoting the store; they maintained (and to this day still do) an informative, regularly updated and friendly Facebook presence; they joined and assumed an active role with their buying group.

‘What will I miss leaving this industry is the look on peoples faces when you pull out an enlargement of a loved one,’ said Rob. ‘It’s priceless, and it gives me the biggest buzz.’

‘Print places still have a niche market but need to concentrate on the personal aspect of photography,’ said Rob.

He listed the following as the kind of services which would define the successful photo specialist.:
– ‘Super-duper’ service of the the type you do not get at Harvey Norman /K Mart/
– Photo organising classes
– Photography classes
– 3D Printing
– Photo restoration (‘Restoring old photos has been huge for us.’)
– Canvas and foamboard large format printing
– Sublimation/T shirts/Mugs and everything else

‘We only stock budget cameras and only a few,’ said Rob. But that doesn’t mean a specialist should withhold their expert photographic advice: ‘I have a policy of assisting people making a choice regardless of where they buy their camera. They come back to us for everything else – it works.’

He said that film had also been a hot spot for the store, driven to a certain extent by young people having old 35mm SLRs handed down by grandparents, etc.

He tipped a big uptick in prints from smartphones in the future, but perhaps not all those prints would be coming direct from photo stores.

‘There are more photos being taken that ever before but our mix is still 50 percent camera card and 50 percent phone. My guess is that the cellphone usage will soar and we are now seeing cameras/phones and printers all in one.

‘We have been selling these for years with the Bolle printer but they will become smaller. Polaroid is on to a winner with the instant products. (Polaroid this month announced the compact Zip smartphone/device printer.)

The biggest challenge, he said, was that the future lies with younger customers, but ‘the young ones at this stage do not understand the value of prints.’

And the thing the indusrty needs to change the current downward spiral?

‘We also need a massive educational effort to convince people to get personalised service from their LOCAL specialized store.’

– Any volunteers out there?