CIPA, the Japanese camera manufacturers association, has released its full year analysis for 2014 and predictions for 2015, both of which reflect an industry in retreat overall, but less so in the interchangeable lens camera and lens categories in which photo specialists primarily operate. 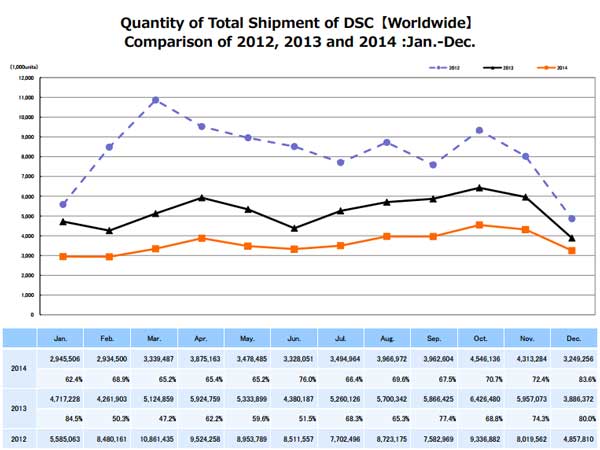 It also needs to be noted that sales of Samsung cameras are not included in the figures, and as Samsung increases market share, CIPA figures will be less reliable as a measure of the state of the overall market. With Samsung now said to be among the top four camera manufacturers, CIPA’s figures might paint a more negative picture than the camera stores are seeing.

The decline in unit shipments has been the trend since at least 2011. What marked 2014 was that shipments of interchangeable lens cameras also declined, falling to 114 million units, a year on year decrease of 19 percent. However, this comparatively smaller decrease in interchangeable lens cameras saw them, for the first time increase their share of shipments to over 30 percent, rising from 27 percent to 32 percent.

Sales of lenses themselves dropped to 23 million units, a decline of 14 percent.

CIPA predicts total shipments of cameras from Jan-Dec 2015 to continue to decline, down to 35 milllion units, a 20 percent decrease on 2014. Compact cameras are predicted to fall by 27 percent, while interchangeable lens cameras will fall by a more manageable 6 percent.

Shipment of lenses are predicted to fall by 6 percent.

CIPA concludes by noting: ‘It is highly expected that there will be a so-called step-up demand among users who first discover the joy of photography with low-end digital cameras and smartphones…These users will gradually seek higher resolution and higher functionality that allows them to take photographic scenes that will never be possible with  low-end products…

(All figures and percentages above have been rounded off to the nearest single digit.) 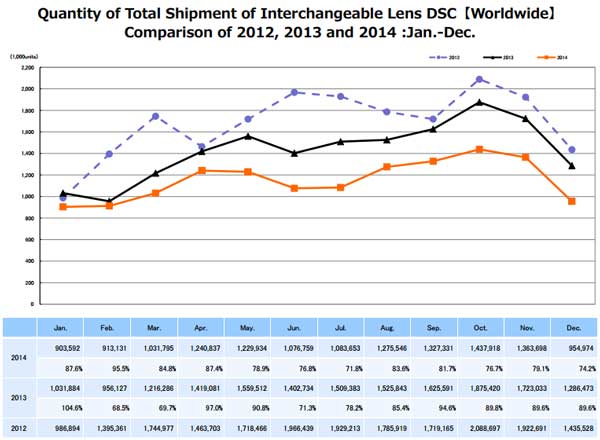