Is Canon losing the plot?  A regular reader who requested their name be withheld (they play hard in North Ryde!) thinks so…

Is the seemingly-unstoppable Canon behemoth starting to wobble on its pedestal?
Industry insiders, competitors and many customers now think so. 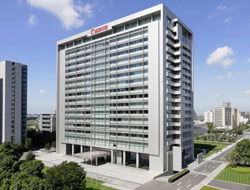 When you are top of the pile it can be a dangerous time which almost certainly engenders inappropriate attitudes within giant companies. A myopic view of the world can lead to poor planning, a feeling of superiority, errors of judgment about the market,  arrogance, a lack of vision for what is waiting for you just around the corner (generally a corporate mugger, or maybe two to three) and a lack of understanding of what your customers really want.

More importantly, how to reach new customers with exciting solutions is the thing – it is
much more difficult now as new stages of history unfold at a breathtaking rate – and although that seems true for just now, it has always been so to a lesser or greater degree, creating corporate and government havoc in its wake. Change can be a bitter pill or a godsend depending upon how you manage it. Just ask Kodak, PanAM, Sony, Philips, Microsoft, the orginal Apple company and dozens of other once-leading oganisations – all have suffered greatly or simply disappeared due to their inability to change by true innovation driven by customer needs, rather than taking their leading position as the ongoing state of play.

In the case of the new Apple, the once almost defunct company has been brilliantly re-generated. But for the reasons listed above, Apple may become vulnerable rather than impregnable, over the next decade.

All the companies mentioned were powerful leaders in their category with a brand once valued as much as some entire countries. Not so now. Change brings about constant disruption – just look at the effects of Uber around the world on taxi companies literally asleep at the wheel; companies that created an army of dissatisfied customers who migrated elsewhere when the opportunity presented itself.

It is a simple matter to measure your sales; it is damn nigh impossible to measure the
satisfaction level or the future intentions of your clients. No survey will reveal all of that
information. What they say does not indicate what they think or what they will do.

For example, if there was a real alternative to the big banks, you could easily be trampled
to death in the stampede to migrate to a better option, and yet banks measure their success only by their profits and continually refer to ‘serving the best interests of their shareholders’ but never mention the real owners of the banks – the customers.

It is not too strong a statement to say that Canon is at a critical stage in its history. They are under attack from so many quarters, it is difficult for them to have a straightfoward plan for the future. Canon’s planners totally missed the ‘Go-Pro-sports camera’ market (worth billions); they failed to address the light-duty underwater ‘knockabout’ market now controlled by Olympus, Panasonic, Ricoh, etc; and have not done enough in the burgeoning ‘bridge’ camera range (although their SX60HS is very successful).

Canon have made similar mistakes to Kodak and are now dealing with falling profits, declining SLR sales, decreasing compact sales, almost non-existent traditional amateur video camera sales, a total lack of impact in the mirrorless area, and are under serious challenge from Sigma and Tamron in lens sales.

Canon’s lens sales have not been growing to any degree in any event, due to the impact of the now-powerful mirrorless brigade – mainly Olympus, Sony and Panasonic. And what about the powerful South Korean group, Samsung – they clearly have plans for the future of imaging and if they emulate the success of Koreas’ motor vehicles in the camera industry, then some Japanese makers may well be really brought to account.

But there is a deeper reason for Canon’s worldwide malaise. Many people feel that they have done a good job over the last few years of alienating their dealerships, and at the same time have managed to create an army of disgruntled customers. The company has sold sophisticated SLRs like lollies through discount chains, to some people who will never understand or use them to the best advantage, and who remain unlikely to repeat that mistake in future camera purchases.

But worse, when they lack enthusiasm for their purchase, clients do not purchase millions of dollars worth of valuable accessories and lenses, as they might do if inspired and enthused by traditional specialists.

Many of Canon’s (and other makers) problems are built around stability – or more accurately, lack of stability in the marketplace. No one knows the value of anything anymore; Japanese marketing is a bit like a bazaar or a used car yard. Clients don’t trust the price anymore – tomorrow there will be a raft of new offers. In a stable market, a decision which might take a day or two (or less), in an unstable market it can take weeks, while the client waits for a better offer or shops around all over the world, ‘reality checking’ what they have been told.

In the meantime, a high percentage of these potential buyers go cold on the whole idea and simply revert to using their phones to record important events.

Also, thousands of once-loyal Canon customers have deeply ingrained memories of outrageously expensive repairs: card receivers for example, or lenses with built-in factory faults, which instead of being repaired at no cost (like many cars would be) owners have been quoted up to half the price of a new lens to rectify what was a design problem in the first place. (Eg – the notorious 17-85mm Canon ‘kit’ lens, and many batches of the expensive 24-105mm L IS lens. In one reported case, the owner of a 100-400mm IS lens was quoted more than the wholesale value of the lens to repair the stabiliser and the USM system. Naturally, the lens remains unrepaired and a highly disgruntled customer failed to purchase a new Canon lens, but rather opted for a Tamron, because, ‘it was cheaper new than the repair of the 100-400.’

These owners will not only be unlikely to purchase any further Canon lenses; many will either use what they have, or continue to migrate to Sigma and Tamron. It’s a gift to these two companies.

While the giant Canon company is in no immediate danger financially , no organisation is big enough to control the outcomes of the market. And there is distinct evidence of a worrying decline which needs to be addressed urgently.