Canon in the US seems to have broken ranks with other photographic companies (but in a good way this time!), embarking on a TV campaign for Pixma printers to encourage consumers to print (among other things) their photographs. 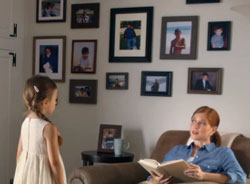 Working with long-time ad agency Grey New York, Canon has produced a series of short, humorous ads under the Never Again tag illustrating incidents in which a hard copy print would have been a better, more reliable option than screen display.

In one, a young girl asks why there are so many framed images of her older brother, but none of her. ‘Well, when you were born we had Facebook. So you’re tagged in all of mommy’s Facebook photos,’ is the uncertainly delivered and ill-received response. 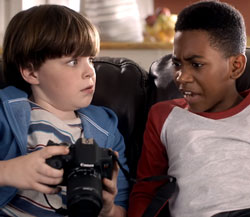 In another of the ads the same mother hands her son and his friend her camera to find some shots of him playing football – but he stumbles on to action shots of a different nature.

Click here to view the six ads in the sequence. There’s even one of the Facebook-era daughter dubbed in Australian English.