Canon has briefed its retail customers on plans to launch a New Zealand online store direct to consumers and professionals on or around August 3.

PhotoCounter asked several New Zealand photo specialists to give their opinions on the Canon move, which follows Canon Australia’s decision to go directbseveral years ago. We have decided to publish those comments with only minor editing, rather than risk being seen to be selecting sections ‘out of context’.

Greg Bramwell,
Photo & Video International, Christchurch
It is true, there is no question Canon are going direct.

I can see their thinking, they are trying to protect their market share and their clients that sell nice gear (like us) are disappearing fast over here. They will always have market share in CE as that is where they shift loads of units, as you well know. They have a funny way of interpreting market share that suits their own purposes, but everyone does that.

I have a mixed relationship with Canon, the products are great but as an owner-operator I struggle a bit with their policies and rules. This is not their fault, often their rules are made well above the level of the middle management guys I deal with. I feel for them a bit as with a swipe of a ‘suit’s’ pen the current team may well  be restructured into oblivion if the numbers are bad.

Consequently the fact they are going direct will not make a huge difference in here. My Canon clients buy nice gear that they will want coherent info about, they will want to trade other gear in, and they will want other items that are non-Canon. This is evidenced by the fact that our biggest selling ‘std’ lens for a 5DsR  is the Sigma Art series 50mm f1.4.

Everyone has to find their own way to make a dollar in this tough world we are now in, I wish Canon all the best. I hope they have employed people with enough knowledge to answer the questions they will get…We still buy from them and will continue to do so, but I’m very pleased that I have moved enough of my business away from them to not feel like this is a calamity.

Three  years ago I would have taken to myself with a sword on the breaking of this news, now we are OK with it. Trying to run their business and mine at the same time has proven beyond me and I’m going to focus on the stuff I can control.

We went back to Greg and asked whether the Canon Australia model of harvesting customer details via cashback promotions (and instant cashback via the Canon store) would be a concern if applied in the New Zealand market:

‘…I suppose it does have some ramifications but I’m intensely proud of the loyalty my clients show my store. This may be a bit of an ostrich theory, but if they want to go chase a client I sold an 1200D to, for 6 percent margin, to offer them an appalling backpack cheap that is up to them. Just who in their building is actually going to do the work is more the question. I would love to be a fly on the wall when a client orders an MT-24EX macro Speedlite and then goes back to them and asks why it won’t fit their 100mm f2.8L macro (the right adaptor is not supplied) and then wants to know why Canon don’t have one and haven’t had for one months.

Steve Worley,
Yes Photo & Digital
Wanaka
Having read about what has happened to Canon Australia going to the customer direct then it does not surprise me that they will do the same in NZ.
Actually for a high TO low margin product they may be doing us a favour in the long run as it is us who has to compete with the parallel market, not Canon (Inc). There are still plenty of other camera companies to trade with.

Stephen Feldon,
PSS Group
PSS has a great working relationship with Canon here in NZ, and consequently when we met face to face with them two weeks ago the first thing we were told is about their pending direct to market push.  They were very upfront with it.

We all knew it was just a matter of time until the Australian model came to NZ, and I guess we are fortunate that it was five years since Canon Australia launched its e-commerce site.

We have been assured by Canon that no ring-fencing of product will occur to secure sales on their website over providing an order for a retailer.  We have also been assured that no aggressive pricing will take place.

The whole purpose of the website is to meet needs and requests of customers who are not being serviced well in their local marketplace. The example was given around a customer wishing to purchase a spare battery for their Canon camera prior to a trip overseas. The local store couldn’t provide one, even though the camera was a current model, thus the website overcoming Canon customer dissatisfaction in the network.

If we see any aggressive pricing or models being available via the online store and not to retailers, Canon knows the course of action we’ll take, and they ultimately don’t wish to see this happen either.

Canon will not be the only manufacturer going direct.  I’m certain others will follow, as they have already overseas.

Following the leader?
Where the market leader moves, competitors tend to follow. Yet while other camera suppliers also have direct-to-consumer online stores, none are anywhere near as aggressive in promoting their own retail businesses.

This is how one industry insider described the likely development of the Canon NZ store, based on the Australian experience:  ‘If the Australian model is to be followed then that offer [instant cashback and launch offers direct to consumers] will morph into pre-sale offers with guaranteed stock while retail begs for the scraps, and special promotional offers to end users further eroding retail margins for the photo indy channel….I’m concerned that the loss of that Canon business may significantly affect the profitability of these small photo businesses and accelerate the rate of store closures. It starts a slippery slope that cannot be reversed.’ 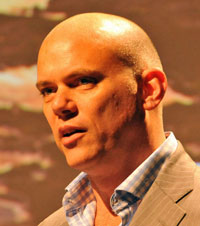 – If the above assessment is credible, its fortunate that Nikon and others haven’t used the Canon precedent to justify a similarly aggressive stance in competing against its customers.

‘Yes we have an online store, but if you look at the MyNikonLife website every product is linked directly to a dealer’s shopping basket,’ said Nikon Australia managing director, James Murrray (pictured right)

A comparison of the MyNikonLife website (where the Nikon store is housed – but not highlighted) and the standalone Canon Store illustrates the two opposing approaches, with dealers the hero on the MyNikon site and totally ignored on the Canon store. Moreover, the Canon dealer locator – not a part of  the Canon store website – is buried deep in the Canon website structure, and is clunky and over-elaborate.

‘We are committed to driving customers to our retailers stores. So for instance, pre-orders go into stores,’ said James Murray.

‘We feel that having 400 or 500 healthy CE and photo specialty retailers is far more powerful, and we will continue to drive consumers back into retail,’ said Mr Murray.

‘The launch of the D750 is a good example. We invited consumers to place pre-orders which were allocated to their nominated dealer.’

He said that Nikon did not harvest customer data for direct promotions.