A tale of two product launches

Regular readers of PhotoCounter will have probably noticed a level of editorial frustration at the sign-off on Nikon product press releases, ‘Please Refer to Australian Authorised Resellers for Local Pricing‘ and the Canon equivalent ‘Prices will be set at dealer discretion.’

– So one dutifuly jumps onto an Australian authorised reseller’s website on the off chance that the supplier has pre-briefed the local retailer network on the camera and local pricing, AND given them the OK to start taking pre-orders the same day as the media receives the press release. This rarely happens. Maybe once in my recollection. What Canon and Nikon are actually telling the media is, ‘we aren’t telling you the price and don’t bother calling us to enquire.’

So rather than just running the new product announcement without providing any notion of price, one then jumps onto the Canon or Nikon US website, where there will invariably be a version of the press release with the local price supplied. And because of the looser price-fixing rules over there in the land of the free market (aka ‘Minimum Advertised Price’ or ‘Universal Pricing Policy’), that will be the price – less a buck or two – even on the Adorama and B&H websites – at least during the critical launch period.

As PhotoCounter is directed to a trade/retailer readership and has no consumer subscribers we know of, we have no issue with providing the US price rather than no price at all.

Canny retailers will know that, depending on the supplier, they can add 25 – 30 percent and round it up to the nearest $100 and that will usually be the local RRP.

But this week Nikon seems to have changed the formula in several ways. In the first week of March it issued a press release on its new top-of-the-line APS-C format DSLR, the D7200, flagging a March 19 local availability date. The first change to standard operating procedure is that this is about two weeks in front of the US press releases’ ‘early April’ release date. Imagine that – the local market stealing a march on the US! The second, even bigger change, is that the Australian price – when we referred back again this week to Australian authorised dealers, who by now were up to speed – is well under the US price.

The (body only) US price (Nikon US press release, Adorama, B&H) is US$1200. This is A$1584 at today’s exchange rate. Yet the local price offered by a range of specialist retailers in Australia is somewhere between A$1371 and A$1400 (although it’s $1449 on the Nikon online store). We have never seen an Australian price on a DSLR a full $200 cheaper than the US price. Pentax cameras from CR Kennedy have for many years given consumers no reason to shop with offshore online retailers or local grey marketers, but actually coming in significantly lower than the US price is something else.

What’s even better for specialist retailers is that the D7200 doesn’t yet seem to be in the catalogues or websites of JB or Harveys. Local grey marketers don’t seem to be stocking the camera as yet, neither. DigitalRev from Asia isn’t even quoting a price, and the best you can do on eBay is over $1500 (when shipping is included), out of Japan. Is there a window of opportunity for locals to turn the tables here? (Just asking the question.) 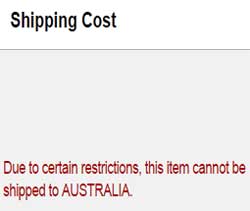 While bumping about the internet researching all this I was reminded of another interesting thing about Nikon. Even if the US price was $200 lower, rather than $200 higher, it’s all academic. When you try to order a Nikon camera from B&H or Amazon, the following pop-up box appears: ‘Due to certain restrictions, this item cannot be shipped to AUSTRALIA.’ (Although naughty Adorama seems to be flouting the restriction at present.)

– It’s interesting to note that Nikon was able to enforce this restriction on its largest authorised US online retailer. The same restrictions do not apply to purchase of Canon cameras from US authorised dealers. 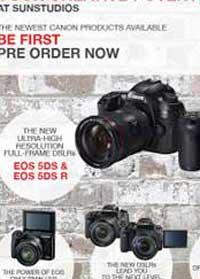 Now compare this to Canon Australia’s handling of its latest batch of new releases: The EOS 750D (T6i) and 760D (T6s) are already on pre-order (US$749 and $849 respectively) in the US, with expected availability in April. In Australia local retailers don’t have a price or availability date to offer so the best they can do is ask prospective buyers to register their interest.

But just a few days after the launch, Canon’s own Sun Studios had online ads and an email blast out to thousands of enthusiasts encouraging them to pre-order.

Ditto the professional EOS 5DS and 5DS R DSLRs. And tou can order one of those right now from Adorama or B&H (US$3699 for the 5DS) with ‘availability for purchase’ on June 29.

So it’s worth considering that there are significant differences in the actions of these two fierce competitors when it comes to their approach to the specialist channel in Australia. And actions always speak louder than words.