A Shotbox across GoPro’s bow

Chinese manufacturer AEE has relased two GoPro actioncam competitors in the form of the Shotbox S60 and Shotbox S71, at RRPs of $299 and $439 respectively. 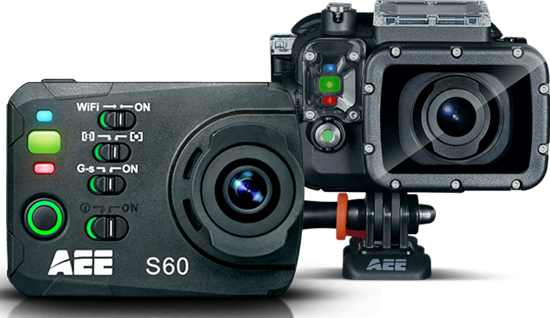 The S60 is a 16-mepapixel Full HD camera with a Wi-Fi reach of around 100 metres. It connects to Android or Apple devices via app for remote control.

It has a built-in stereo mic and speaker and also supports external mic recording via its mini USB port. The S60 includes a detachable 2-inch LCD display that mounts onto the front and lets you monitor your videos live.

The camera measures approximately 2 inches in height and weighs under 100 grams. A broad range of quick-release, pivot-joint and adhesive mounts are available for motorsports, biking, skiing, boarding, and other sports.

A waterproof-to-10-metres housing is also included in the purchase price for surfing and underwater use. A 100m+ AEE waterproof housing is also available for the Lloyd Bridges among us. (The website seems to say that the 100m housing comes with the camera, although it’s all a bit ambiguous.)

A 1500mAh lithium-ion battery is included and is rechargeable using the supplied USB cable.

Stills are at 16 megapixels and burst speed is 10 fps. It has the same super slo-mo performance as the S60.

Other than that, both cameras have similar specifications. Both accept miniSD cards to 64GB. Both cameras come with several basic mounts, the detachable LCD screen and a carry pouch.