Sony has announced June availability of a couple of 30x zoom Cyber-shot digital compacts, the HX90V and WX500. 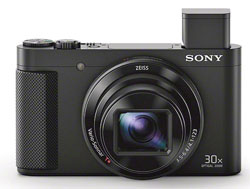 Both models include Zeiss Vario-Sonnar T f3.6-4 30x zoom lenses, flip-up screens for shooting ‘selfies’ and each is equipped with an 18-megapixel Exmor R CMOS sensor and Bionz X processor.

The HX90V (right, RRP $599) features a pop-up OLED electronic viewfinder, and a control ring for functions such as manual focusing or step zoom. It also comes equipped with GPS functionality.

The WX500 (below left, RRP $479) doesn’t have a viewfinder or GPS or a hand grip. Otherwise they are fairly similar in looks and specifications. 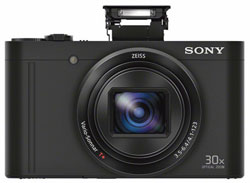 Both cameras feature five-axis image stabilisation and an autofocus system which Sony says is similar to that used in its α7 series cameras. The 910,000-dot monitor can be used for retouching shots with the camera’s built-in editing and enhancement software.