Presentations on websites and social media strategies are generally delivered by fast-talking ‘web gurus’, and generally leave most of the poor benighted audience thinking to themselves ‘this is rocket science and I need help – what’s that presenter’s phone number?’ 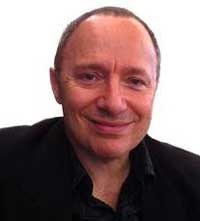 The session at the PMA Specialty Photo Conference shared by Bruno Polito (pictured right, national marketing manager, Independent Photographic Supplies) and Paul Dawson (Hydro Photographics, Port Macquarie) was a refreshing change from this formula. The first part of the session addressed some basic tips on developing a website which will help generate business, followed by advice from ‘Dawso’ on how to get higher up the page in Google searches (aka ‘Search Engine Optimisation’).

– That’s not to say there was no promotional element involved! In Bruno’s case, the examples of high-performing websites came from the ranks of Dakis customers. (IPS is the local Dakis affiliate), while Paul Dawson has an association with Google as an Official Photographer.

Bruno delivered five easy-to-understand and eminently achievable tips for success online. The first was to actually be online (well, yeah), followed by:
– Be optimised for mobile;
– Be content rich and social network connected;
– Be ‘above the fold’;
– Be differentiated.

While some retailers have adopted a minimalist approach to being online or simply hope they can get by without a website, that’s unlikely to be a winning strategy in the long term. Why? A third of the world is online, and 61 percent use online for their product searches. But simply being online is not enough if you are selling hardware. A product ‘comparator’ is worth considering, said Bruno.

The Paxtons’ website’s camera comparator was presented as a good example of the breed, allowing shoppers to compare models by a broad range of categories and drill deep into the specifications.

‘Obviously this will increase online purchases, sure, but it also increases in-store traffic,’ said Bruno. ‘If you give people the tools to research online they will still purchase in-store.’ (A behaviour which is being called ‘web-rooming’, as opposed to the far more unpleasant showrooming.)

Moving from hardware to print services, he noted that there were 250 billion images online on Facebook alone.

‘So if you want to provide an online print service you don’t just want customers printing what’s on their cards and hard drives and phones, but also have access to where they are storing images online.’

It’s important for websites to be optimised for mobile because of the ubiquity of mobile phone usage and because around 60 percent of mobile users do product and service searches on their mobile device.

He used the mobile version of Brisbane-based Fotofast’s website as a good example. Ordering prints online is simple and clean, which helps maximise the number and size of orders.

When it comes to content, Google is now too sophisticated to give a website page a good ranking simply because words such as ‘digital camera’ or ‘photo services’ are repeated endlessly. (In fact, if key words make up more than 4 percent of the text, clever Mr Google actually marks the page down.)

‘If you are content rich people will find you and they will love you. Just as importantly, 70 percent of searches are organic – they are not paid for.’ Consequently, spending money on online advertising to attract customers without investing time and/or money in having a content-rich, engaging site is kind of half-baked. 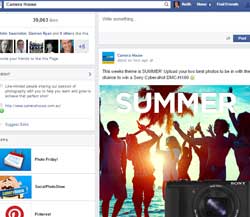 Likewise, having a presence in social media is critical, and Facebook and Instagram are the most important platforms. Sixty percent of Facebook users sign in every day, and 23 percent of those will do it five times a day. (But hey, obsessive-compulsive people’s money is as good as anyone elses’!) Fourteen minutes of every hour spent online in Australia is spent on Facebook. Forty-seven percent of Americans say that FB is the number one influencer for purchase decisions.

‘A few years ago we were saying word-of-mouth was strongest advertising you could ask for. Social media is basically word-of-mouth at the speed of light,’ he said.

The Camera House Facebook page was mentioned in despatches in this instance, as it had lots of Likes (approaching 40,000) engaging content and good links back to the Camera House website.

It’s critical that all the important information, from store location and contact details through to key products and facilities like image upload buttons are immediately visible (‘above the fold’) when the customer arrives at your homepage. Why? Because if customers can’t see what they are after immediately, they are likely to continue their search elsewhere, assuming you don’t have what they are looking for.

Bruno exampled Fitzgerald Photo Imaging’s site, and once again Paxtons, as effective in getting most of the important stuff – Order Online, Upload Files, etc – on the top part of the homepage.

‘Impatient people online will either find what they want or move on elsewhere.’

‘Stand out from the pack’, was Bruno’s last tip. ‘Offer unique and profitable products. If you go to the Fotofast site you will see there’s an absolute plethora. So you go there because he has got such a great range.’ 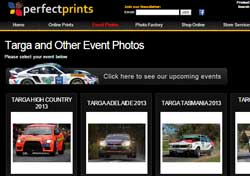 But that’s not the only approach. Focussing down on a niche, high-value category can be another way of profitably differentiating your business. First example of this approach was Perfect Prints in Hobart, where Tim Jones has developed a profitable line in event photography – such as the Targa series of car rallies and the Sydney to Hobart yacht race.

‘People who are fanatics, enthusiasts, will spend money on what they love,’ he said. 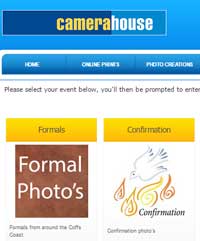 But even if capturing images of fast-moving yachts and sports cars is out of your comfort zone, ‘There is stuff that’s local to your ecosystem. There is always stuff that is local going on.’ For example Coffs Harbour Camera House has honed in on local formals.

‘You can own the formals and valedictory events in your area.’

‘Fifteen dollars must be a sweet spot – and a nice area to be in,’ he said.

Next week Paul Dawson on how to play the Google game and win.