When Rob Watt acquired Winters Camera Centre in Burnie in September, 2012, be bought himself a challenge.

After 40-odd years at the helm, third-generation owner Colin Winter’s original intention was to simply retire and end the business, and Rob read about the closure of one of (if not the) oldest family-run photo businesses in Australia in the Burnie Advocate, one of the newspapers of which he was group advertising manager.

With a background in photo stores in New Zealand before he moved into the advertising business, and an increasing distaste for handing out redundancy notices to his staff at Fairfax, he made a late bid, and found himself back in photo retailing with the re-named ‘Watts Camera Centre’.

The store was a bit run down and Colin Winter had let stock levels dwindle, as his intention was closure rather than sale. On the other hand there was plenty of space to play with, and the only competition in town was Harvey Norman. (‘There’s a Kmart,’ added Rob, ‘But they don’t seem to know what they are doing these days.’)

‘Harvey Norman still struggles with print quality. I’ll re-do a print from Harvey Norman – and usually only one – if I think I can do better. It always works,’ said Rob.

Rob has a part-time staff of three and spends most of the time on the shop floor himself. (‘Owners can’t hide themselves in the back room these days.’)

He is a member of the Photo Edge group (and on the steering committee) and one of only two Kodak Express stores in Tasmania, the other being Tim Jones’ Perfect Prints in Hobart.

He set about rejuvenating the business:

One of the first steps was to introduce photography courses. The basic introductory course is run over six weeks on Saturdays, and costs $300. Numbers are limited to six and two local professionals are involved in the teaching and field trips.

There are also advanced courses in subjects like night photography and advanced landscape photography, and Rob is looking at an astro-photography course, which will complement his telescope sales. 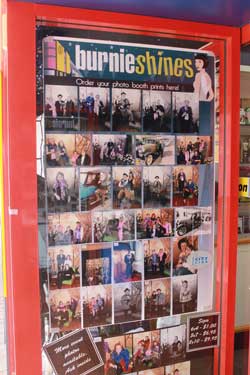 Then there’s the photo booth event photography business. Watts Camera Centre attends local sporting and social events, takes pictures and then features them in the shop window for sale (pictured right). He is considering enhancing this side of the business by using one of the new Kodak Print Place touchscreen/printer systems to provide on-the-spot prints.

He’s also looking at becoming a sub-distributor for outlets in nearby towns who take on the new stripped-down Kodak Print Place units. (This could be a model which answers the distribution cost challenge of delivering small orders of media to remote locations – the Achille’s Heel of Kodak’s plan to Print Place the world.)

In short, Rob Watt’s strategy is to offer all he can on a DIY basis. 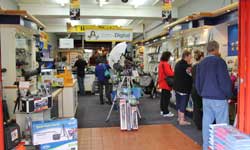 ‘Colin used to outsource a lot of what he offered, but we do as much as we can in store. We have 44-inch and 24-inch printers and use the canvas wrap system from Photo Direct.

‘Anything to do with photo we do it, and 90 percent in-store. We’ve got more control doing it ourselves. It’s really only the very large canvasses we outsource.

‘One of the biggest things we do, and something I get a lot of enjoyment from, is restoring old photos,’ he said.

Blessed with plenty of extra space upstairs, Rob has a fully-equipped studio which he uses for portraits and hires out to local photographers at a modest hourly rate.

One local professional uses the space frequently, and there’s plans afoot to seek funding from Tas Arts to have an artist-in-residence spend some time up there. 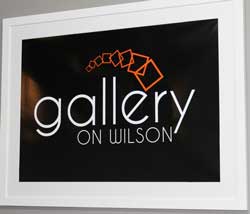 The latest innovation was the opening of Gallery On Wilson, which occurred last Friday (June 27).

‘The local council had closed down its exhibition space so there was nowhere for the “everyman” artists and photographers to display and sell their work. We had some extra space upstairs so we opened up Gallery On Wilson (Watt’s Camera Centre address is 45 Wilson St) last Friday – to a great response.

‘Local photographers can have their prints made here at a special price and mount a display in the gallery.’

Gallery commission is a modest 20 percent, so everyone wins.

Watts Camera Centre can also handle their mattes and framing requirements. Not to mention photo books, which serve as portfolio-catalogues from which to sell their work.

Rob promotes via two active Facebook pages – one for the store and now one for the gallery. He also uses shopper dockets and his background in newspaper ad sales serves him well with the Burnie Advocate.

‘I never  pay full price,’ he said. ‘There’s always “distressed space” they are trying to get rid of. They know that if there’s anything under a couple of hundred bucks, Rob will take it!’