The price fix is sticking

Last week when we reported on CIPA camera shipment figures we noted that ‘The Americas’, which of course includes the giant US market, was the worst performing region in the world – by far.

It’s likely that part of the explanation for this is that there are now less cameras being grey marketed from the US to other parts of the world.

There are several reasons for the stemming of this trade, which while great for the likes of B&H and Adorama, has had a deadening effect on local retailers in many parts of the world. The two commonly understood reasons are exchange rate fluctuations, with the Australian dollar (for instance) buying slightly less than it did 12 and 18 months ago, and a move by local camera suppliers to reduce the price disparity between Australia and New Zealand and other countries.

What’s UPP?
But the role of what’s called ‘Unilateral Pricing Policies’ in the US gets far less acknowledgement. While UPPs (also called MAPs ‘Minimum Advertised Pricing policies’) from most camera suppliers have caused average selling prices to go up in the US (another reason they aren’t selling so many units in the US), they’ve proven a godsend to Australian retailers, or retailers anywhere else who were losing their customers to the US online giants.

On first glance, UPPs are what we in Australia would recognise as retail price maintenance, which is quite illegal here and in the US. However, stateside, in a neat bit of legal logic, if a supplier unilaterally declares that its products can’t be sold at under a set price (RRP here, and MSRP in the US) then there is no agreement between the supplier and the retailer, so no law has been broken.

Here’s a more elaborate explanation from corporate law form K&L Gates:
Such a unilateral policy should consist of the supplier’s publishing a list of suggested resale prices to its resellers and simultaneously announcing that the supplier will stop selling to any reseller who sells below those suggested prices. Such unilateral policies have been legal under federal and state antitrust law for nearly 100 years.

Even if a state law regards resale price agreements as automatically illegal, a unilateral policy means that no agreement exists in the first place, and, absent an agreement, the state antitrust law does not apply. – ‘Legal Insight’, August 2, 2013

– Since UPPs became fashionable, somewhere around late 2012, the big online discounters have dutifully advertised new camera releases at the same prices contained in the camera companies’ US press releases – perhaps transgressing to the point of offering a $999 camera for $996. This has probably helped smaller US retailers compete in price terms with the big guys, as well as benefiting us here in Australia and New Zealand. 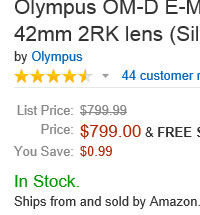 When the UPP craze came in – and it is applied to other categories of consumer electronics, particularly televisions – pundits predicted it would maybe last three months or so before it collapsed back into the price-cutting frenzy which prevailed beforehand. But for well over a year now the suppliers seem to have held their nerve and the big retailers like B&H and Amazon continue to play nice. Of course the rules are a bit less rigorously enforced once a camera has been in the market for a while. Even the suppliers who sell direct online price cut. (Canon Australia would have to stop supplying itself if we had a UPP system in this market!)

Just recently, however, there’s been an outbreak of bundling with new cameras which could be the beginning of the end of the UPP era. So for instance the Sony Cyber-Shot RX100 iii –  mentioned this week in Photo Counter in a different context – is being offered by Adorama for $798 ($1 off the MSRP) by itself, but also at the same $798 price with a Bundle of a LowePro case, 32GB Class 10 SDHC Card, cleaning kit, screen protector and USB Card. So they aren’t actually undercutting that minimum price, but simply offering some extras for the same price. Amazon and B&H are now also doing this kind of thing with popular new release models. There are also occasional ‘open box’ discounts – which could be another way of getting around the UPPs. (After all, how many boxes get accidentally opened at B&H anyway?)

GoPro seems to be aware of the bundling fiddle. Here’s one of the clauses in its Minimum Advertised Price (MAP) Policy:

– Where GoPro products are bundled with or sold as part of a package that includes other products (whether or not manufactured by GoPro), it shall be a violation of this MAP Policy to sell or advertise the bundle (or package) at a price that: (a) is lower than the total Minimum Advertised Price of the GoPro product or (b) violates the letter or spirit of the MAP Policy.

Not only that, you have to get GoPro’s permission to do any bundling at whatever price:

– It shall be a violation of this MAP Policy if products are bundled with or sold as part of a package that includes products not pre-approved by GoPro.

– To have a read of the full, jaw-dropping GoPro MAP policy, click here. It’s what I believe our American friends call ‘a doozy’!