Olympus has announced the SH-1 – a PEN-styled traveller’s camera for release in May, and a new Tough model, the Stylus TG-3 arriving a month later. 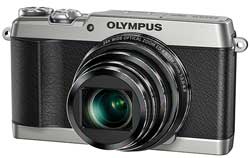 The Stylus SH-1 has been designed for travellers and offers a focal length range equivalent to 24-600mm in 35mm format. It features a textured leatherette wrap-around a slim, brushed-aluminium body for a stylish look and feel. A new leather body jacket complements the premium presentation of the camera, which at just $449 RRP should be a relatively easy sell across the counter.

The Olympus SH-1 will be available in Silver and Black from May 2014. Recommended retail price of the SH-1 is $449, and with a US price of US$399 – well who would bother looking elsewhere? 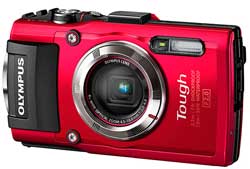 The new Stylus TG-3 replaces the TG-2 as the flagship of the Tough range, featuring a similar 16-megapixel CMOS sensor to the SH-1 plus a relatively fast f2.0 lens with a wide 25-100mm (35mm equivalent) range. Waterproof functionality is equivalent to JIS/IEC protection class 8 (IPX8), which in English means it can be used at depths up to 15 metres. The TG-3 is also drop/shock-resistant to 2.1 metres, freeze-proof down to -10 degrees and crushproof to a big fat man sitting on it.

Features include built-in Wi-Fi with GPS support via smart-phones, a new Variable Macro System (VMS) with up to 44.4x display magnification in the Microscope

Mode plus built-in focus-stacking, focus bracketing and underwater macro functions. The TG-3 supports the most complete system accessories of any Tough camera, according to Olympus. Waterproof fisheye and telephoto lens converters widen and lengthen its shooting perspective, on land and underwater. For macro illumination, a new ‘LED Light Guide’ accessory channels the light from the camera’s built-in white LED into a ring pattern that provides evenly distributed lighting. (The macro focusing range is from just 1cm.)

A new underwater housing lets you photograph underwater to a depth of 45m.

The Olympus TG-3 will be available in Black and Red from June 2014. Recommended retail price of the TG-3 will be $499. Accessory pricing to be announced.