Details of Sony’s ‘new’ DSLR-styled mirrorless camera, the a3500, have emerged on the Sony Australia website, but no official announcement has followed. 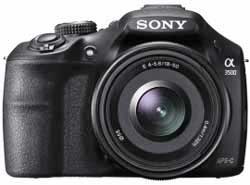 Making this release even more curious is that its predecessor, the a3000, was only released in September last year, and appears from the website to have been discontinued and replaced by the a3500.

This is exclusive to the Australian website, with both the Japanese and US versions having no mention of an a3500.

The camera appears to be identical to its predecessor, with the sensor, ISO sensitivity, video recording and even overall weight (body only) matching the a3000. The only clear difference is that the a3500 comes with a slower (f4 Vs f3.5), non-stabilised 18-50mm lens, as opposed to the a3000’s stablised 18-55mm. And of course it’s badged ‘a3500’.

While the lens is inferior, it is also slightly smaller and more compact – which may be Sony’s strategy for marketing this ‘new’ model. Or maybe they just thought they would save a few pennies on a cheaper lens for the Australian market and consequently increase their margin.

A comment from Sony via their PR consultancy, Hausmann Communications, may or may not be coming soon. Meanwhile, the world’s photography and consumer tech websites are all over the story.

It will be interesting to see how Sony presents an effectively identical replacement model that comes with an inferior kit lens – at the same price. How embarrassment!