Sony has announced a new mirrorless ‘NEX-like’ camera, the a5000, along with a new Cyber-shot, an upgraded actioncam and a compact 4K camcorder.

Although Sony is phasing out the NEX sub-brand, the a5000 has the same design as Sony’s other NEX models and comes with a 20-megapixel APS-C Exmor sensor and BIONZ X processor. Sony claims it’s the world’s smallest and lightest interchangeable-lens digital Wi-Fi camera. It also features NFC and supports one-touch sharing/remote control with smartphones and tablets.

The monitor can be tilted vertically for single-handed ‘selfies’ and a handy lever on the camera body allows fingertip adjustment of the optical zoom. Sensitivity is adjustable manually up to ISO 16,000, while ‘Photo Creativity’ puts intuitive control over settings like Picture Effect and Background Defocus within easy reach. An on-screen guide is available for less experienced photographers.

The latest addition to Sony’s Cyber-shot line-up is the W830, which features a 20-megapixel CCD sensor and Zeiss 8x optical zoom lens. Designed for snapshooters, this model is simple to operate and features an advanced flash which optimally controls ISO sensitivity. A metallic coating on the body is available in four colours (black, silver, pink and violet). The W830 is due for release from February. 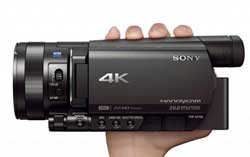 Other features include a bright, high-contrast OLED Tru-Finder with a wide angle of view, selectable Clear, 1/4 filter, 1/16 filter or 1/64 ND (Neutral Density) filters, built-in Wi-Fi and NFC and ergonomic controls. The FDR-AX100E is scheduled for release from May 2014.

The Sony press release quoted a price ‘around US$2000’ for the new camcorder. 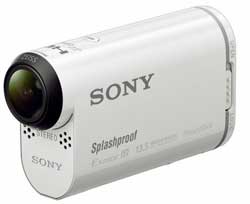 Sony’s new Action Cam (model HDR-AS100V) ‘point-of-view’ camera adds a BIONZ X image processing engine, a new lens and image sensor for significantly improved image quality, and high frame rate capability for capturing slow motion video. The newest model is splash-proof without the need for a separate housing. A new feature lets users control up to five HDR-AS100V models with the Live-View Remote and record simultaneously with them all for a multi-view picture.

The remote control function also works with other Sony digital imaging products such as the alpha, QX, Handycam and Cyber-shot lines.

The new Sony Action Cam will be priced around US$300 in the US market, with the current model to drop in price, according to the Sony US press release.