Lytro has unveiled the Illum light field camera, a serious upgrade to the original Lytro camera announced around two years ago. 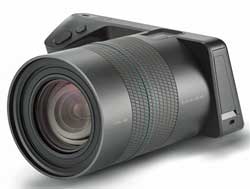 Lytro cameras captures information about the angle from which light has arrived, allowing for post-capture depth of field control or 3-D images – what Lytro calls ‘living pictures’.

The Illum has a design closer to the look of a conventional camera and uses a larger, 1-inch sensor. It has a fixed zoom lens (30 – 250mm equivalent) with an impressive f2 constant widest aperture.

The Illum has 40 ‘megarays’ of angular resolution, which delivers an image of around 5-megapixel resolution.

Program, ISO priority, shutter priority, and full manual shooting modes are supported. The camrera ruins on the Android operating systems and includes shooting tools like a new depth overlay to help photographers preview the three dimensional characteristics of the image prior to capture.

It has a 4-inch articulating touchscreen LCD with 800×480 pixel resolution, and minimal physical controls. Top shutter speed is 1/4000 sec. The camerea weighs in at just under one kilogram.

Following the modern tendency towards pomposity and hyperbole in press releases, Lytro founder Ren Ng remarked: ‘We are very excited by the potential of this camera to ignite a photography revolution on the magnitude of the transformation from film to digital.’

On the other hand, Darrell Etherington, a pundit on technology website TechCrunch opined that the Illum is not likely to ignite any sort of revolution, but is simply a photo industry curiosity: ‘The Illum is a beautiful gadget that tickles the hearts and minds of camera lovers and device addicts alike, but it ultimately represents another museum piece; Lytro’s building hardware that can occupy an ‘Eccentricities of the early 21st century’ display at a photography exhibit in the Smithsonian, while the real camera industry (read: the mobile phone industry) takes what it needs from Lytro’s advances and quietly ignores the rest.’

(Anyone out there remember Nimslo?)