‘Doing well by doing good’ could be a motto for the Sigma Corporation to adopt if it doesn’t have one already.

From a technological standpoint, the ‘good’ is closer to excellent when we look at the quality of recent releases such as the f1.4 35mm prime lens, and the ground-breaking f1.8 18-35mm – the only zoom lens to offer an f1.8 aperture across the range. Both are members of the premium ‘Art’ series. Sigma is doing so well with these two that it simply can’t keep up with demand!

Selling out all product for the first six months after release and having 2 – 3 months’ back orders is ‘a good problem to have as a manufacturer,’ Sigma Corporation CEO Kazuto Yamaki told Photo Counter, ‘but a serious problem for our distributors.’

Here’s what DPReview had to say about the Sigma f1.8 18 – 35mm: ‘What nobody quite anticipated, ourselves included, was that Sigma could conceivably deliver a lens with optics this good. The 18-35mm isn’t just sharp for a fast zoom; in terms of outright image quality, it’s a match for many fast primes, even when shot wide open.’ It earned a Gold Award, along with a brace of four-and-a-half and five-star ratings from other reviewers.

The DxO Mark group, which puts cameras and lenses through a range of metrics-based bench tests, said the Sigma 35mm f1.4 DG HSM, ‘may possibly be its best yet. In fact it’s one of those rare lenses for which finding any fault seems almost churlish, so good is its overall performance.‘

Why Sigma chose to move from the mass end of the market to making lenses which are now challenging the quality of Zeiss optics – but at a fraction of the price – breaks the hard-nosed Harvard Business School rules of how to run a modern global corporation. It was all about the employees, and the community of Aizu, Fukushima prefecture in which the factory was established in 1973, according to Mr Yamaki:

‘Most of the Japanese camera manufacturers made high-end cameras and lenses up until the mid-90s. But in mid ’90s the Japanese yen became very strong against the dollar and euro so the export business became very difficult – the production costs became so high compared to other currencies. Even before that time some camera companies were making compact cameras offshore, but at that time they began offshoring DSRs and interchangeable lenses.

‘At that time we were also wondering if we should go abroad or not, and we had many people advising us that Sigma should go outside Japan [to manufacture] or we would go bankrupt.

‘But we decided to stay in Japan, because we wanted to protect our employees. If we set up a new factory outside of Japan we would have had to restructure – to shrink our factory in Japan. But our factory is located in a very local area, a very small town. We are the main business in the town. ‘

‘So if we closed down the factory it would have a huge impact on the local town. And also, many employees have worked a long time for us. In some families two or three people from the same family. To all lose their jobs would be a huge impact.’

‘At that point in the mid-’90s we were making relatively inexpensive, reasonably-priced entry-level products. From that point we decided to go for high quality, high added-value products. Since then we’ve tried to make the best quality devices. Now we have arrived at this level.

‘So we transformed our business. We moved from low end to mid- to high-end to keep the operation in Japan.’ 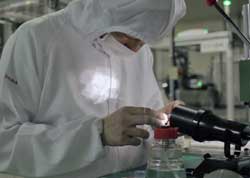 – And now Sigma is the only lens-maker to manufacture exclusively in Japan. Tamron does 95 percent of its manufacturing in China, according to Mr Yamaki. Nikon manufactures mainly in Thailand with only ‘very, very high-end lenses in Japan.’

‘Canon has relatively speaking maintained their operation in Japan, and also make good lenses in Taipei. Their factory in Taipei is good.’

Mr Yamaki did not step back from claims reported at this years’ CES that Sigma felt it had moved beyond the quality of competing lenses from Canon and Nikon with its Art series lenses.

Without a hint of braggadocio he said that Sigma had aimed to better the quality of the Zeiss Otus 50mm with its very latest 50mm f1.4, but had only managed to equal its quality – not because Sigma had fallen short, but because the Zeiss lens had proven to be a better performer than Sigma had assumed.

Pointing to the Sigma 50mm f1.4 he said; ‘In terms of the optical performance and image quality, this is one of the best in the market today.’

Sigma was founded in 1961 by Mr Yamaki’s father. It employs just over 1000 people and has an annual turnover of 33.5 billion yen.

Australia is a successful market for Sigma, perhaps the most important of the markets handled by third-party distributors. It has subsidiaries in larger markets such as the US, UK, Germany, France, Benelux, China, Hong Kong and Singapore, with third party distributors in other countries.

He said that Sigma was most successful in Japan, unsurprisingly, and Europe, and specifically in the cradle of high-tech engineering, Germany. The US was the single largest market for Sigma. The company had enjoyed a significant lift in global sales over the last two years.

Countering the prevailing negative prognosis on the future of the photo industry, Mr Yamaki thinks the serious amateur/professional photography business has a good – and long – future:

‘The market for good cameras and good lenses is protected. People wish to have good equipment that produces high quality images and this demand never ends, I think.

‘In case of other devices – commodity devices like TVs – the customer is happy to compromise with so-so quality, but the photo enthusiast’s demand for ever higher quality equipment never ends. That’s my opinion, so I’m relatively positive for the photographic market.

‘But also the beginners – entry-level customers.’

He said Sigma was now making significant inroads into the professional segment.

‘My dream is to move further into that professional area. We know that many professionals are already using our products. They are one of the most important customers for us.’

Mr Yamaki went on to explain Sigma Corporation’s ‘corporate vision’ (aka ‘Sigma Global Vision’, announced in 2012). And unlike most of these mission/vision things, it even made sense to an outsider. 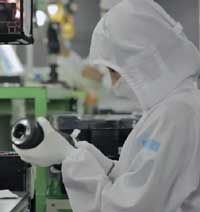 New lenses were not stand alone products but part of clearly defined product lines. The Contemporary series were compact, ‘daily use’ lenses such as the 17-70mm f2.8-4 DC OS Macro, with an emphasis on versatility, light weight and quality at an attractive price. For the Art series, the priority was to manufacture the best quality optics possible, and as a result these lenses tend to have a bit more heft and bulk; the Sport series of longer focal length and range lenses, such as the 120-300mm f2.8 DG OS HSM – is for capturing fast-moving subjects, even at distance, and is aimed at serious sports and nature photographers. These lenses are water and dust resistant.

Mr Yamaki elaborated on quality assurance at Sigma: ‘In order to make a good lens, we needed even better equipment to measure the performance of the lens. At that time there wasn’t such an MTF (Modulation Transfer Function) system available in the market. All the manufacturers of MTF systems use an image sensor, and it captures an image from a chart and calculates the performance of the lens, but the sensors they use are outdated and low resolution.

(The challenge being – how do you really measure the performance of a lens working in tandem with increasingly high resolution sensors if your measuring system is using a lower-res sensor?)

‘This this new A1 [MTF] system uses our own 46-megapixel Foveon direct imaging sensors,’ said Mr Yamaki. ‘We view this new method of performance evaluation as being incredibly important…’

‘We’ve spent more than 50 years perfecting our design and manufacturing processes, and now we deliver a complete package by closing the loop on that commitment to quality by adopting a more stringent verification process.’

– In Part 2 of this interview with Kazuto Yamaki, he discusses Sigma’s camera business, including why the new DP Quattro cameras are something special.