The essential Selfie Brush…
At last, a solution to the First World problem of untidy hair in selfies. Wet Brush, inventor of the eponymous Wet Brush, not to mention the Wet Brush for Men, has now announced The Selfie Brush. 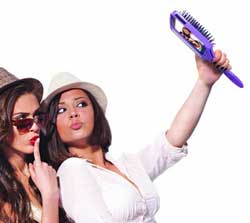 It’s a hair brush, mirror and smartphone case all in one fabulous product! ‘No way,’ you might think – but you would be wrong. ‘Have your best hair in every selfie with the Selfie Brush’ as the good people at Wet Brush helpfully explain.

Not only does this guarantee that you ‘Look good on Facebook, Instagram and Twitter,’ but the Selfie Brush ‘offers superior phone protection’ (although it doesn’t elaborate on what that protection is actually superior to).

With the hair issues untangled, you can now focus on texting or making phone calls with the phone in the brush. You can also access the volume buttons on your smartphone to listen to music while you are either brushing your hair or taking a selfie. And the headphone port is also accessible. All this for just US$19.99.

The Nikon D750 will sit between the Nikon D610 and D810 models in the range, and is targetted at sports and action photographers.

…and the Canon 7D Mark II
The Canon EOS 7D Mark II is also expected to be announced some time between now and the opening of the doors to Photokina on September 16.

It will have a magnesium alloy body, be dust and water resistant, have a 20-megapixel CMOS sensor, a 65-point AF (with all points cross type), continuous shooting at 10 frames per second, and built-in GPS, to name just a few features. More next week, no doubt.

…and Fujifilm X100T
Fujfilm has released details of its X100T premium compact (not available until November). It has an advanced hybrid viewfinder with electronic rangefinder and a ‘Classic Chrome’ film simulation mode. 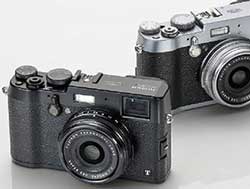 The viewfinder includes an electronic rangefinder for accurate manual focusing while using the optical viewfinder. A small inset digital display allows the user to focus the image manually using the camera’s focusing ring. Parallax correction has been added for more accurate framing when shooting close-ups.

The silent electronic shutter has a maximum speed of 1/32,000 seconds (wow!) and supports sensitivities up to ISO 51,200. Continuous shooting is at up to 6 frames/second for 25 frames at full resolution.

This baby won’t be cheap. Although no local pricing is provided, the US price is US$1299.