A French startup called Prynt has been demonstrating a smartphone with a built-in printer which it describes as ‘the Polaroid of the 21st century’.

The somewhat chunky case’s printer connects to the smartphone via Bluetooth and prints photos in around 50 seconds.

The Prynt case is designed for 4-inch smartphones, but the company says it will make cases for larger models, and promises to speed the print speed as well.

The company is aiming to launch a Kickstarter campaign for the case in early 2015, with a backer price of US$99. Prynt says each sheet of photo paper will cost $0.30.

Losing photographic memories
Research released by US online photo processor, Shutterfly, indicates that more half of the 10 billion photos taken by Americans each month aren’t being shared in any form after they have been taken.

Let’s look at that another way: five billion photos each month are being shared in some form – this is surely a good thing. And with people snapping away indiscriminately, perhaps half the 10 billion images are garbage that didn’t warrant being shared – or even saved.

Unsurprisingly, ‘Millennials’ (formerly ‘Generation Y’ or more archaically, ‘young adults’) are least likely to review their photo collection. Although they snap more than 100 photos each month on average, they’re unlikely to have looked at an old photo in the past month.

‘Photos can be effective memory cues, but they only work if you revisit them. Shutterfly’s research shows that people are taking huge amounts of photos but our revisiting behaviour isn’t scaling with our snapping behaviour,’ said Dr Linda Henkel, a professor and cognitive psychologist at Fairfield University. ‘My earlier research showed that the act of taking photos actually makes us remember the moment less if we don’t take another glance at the picture. To truly keep a memory alive, revisiting the photo is as important as taking it.’

Ninety percent of photo takers agree that revisiting and sharing the story behind a photo with someone else makes it more meaningful, with 84 percent saying they learned about their family memories from photos accompanied by verbal stories or detailed captions. Nearly half of people say that as a society Americans are not spending enough time with family revisiting the stories behind photos, with two-thirds wanting to share more online and in person.

The survey was conducted among 1100 regular photo takers. Sixty percent of them say their primary photo taking device is a mobile phone.

Price matching down and dirty 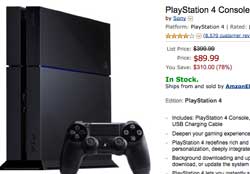 US retailing giant Walmart has restricted its price-match policy to 30 online retailers after being scammed by customers claiming they had could source US$400 Sony Playstation consoles for under US$100.

The scam under the (former) price-matching policy was to set up a third-party online store on Amazon advertising items like PlayStation 4s at a fraction of a realistic retail price. (Anyone with a registered account for selling things on Amazon can list an item at whatever price they choose.)

Then it was simply a matter of taking a screenshot of the listing into Walmart and demanding a price match.

‘We can’t tolerate fraud or attempts to trick our cashiers,” a statement from Walmart explained. ‘This kind of activity is unfair to the millions of customers who count on us every day for honest value.’

Some price-match scamming has been more opportunistic. Recently the Sears website mistakenly advertised Wii U bundles for $60 when the usual price is $300, sending bargain-hunters into competing price-matching retailers to claim their prize.