A Sony Alpha mount version of the lens is also in the works. Pricing of the new Sigma 50mm is not yet available.

Samsung patently superior to Canon
Camera and digital imaging-associated companies featured prominently in the Top 20 list of corporations lodging patents with the US patent office in 2013, as reported by IFI Claims Patent Services 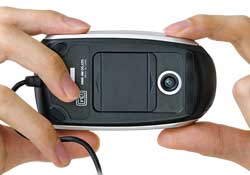 Well what will they think of next! Japanese electronics company King Jim has whacked a digital camera into a computer mouse. You shoot with the mouse and the pic (two-megapixel) appears on you computer screen.

A sliding cover on the bottom of the mouse protects the lens from scratchy things on your desk, but when you uncover the lens the mouse’s laser is covered and you can forensically document your entire office environment. Actually, it could be useful for making quick digital copies of documents, one guesses. King Jim says it’s useful when you want to ‘include an image of something in front of you in an email you are about to send.’ Like a document?

It will launch in Japan this month for the yen equivalent of around $50. 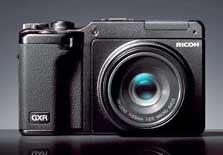 The innovative Ricoh GXR camera system is being discontinued  – at least in some markets.

Amateur Photographer (UK) this week reported that Ricoh Imaging UK has discontinued sales in that country.

It also appears to have been de-listed from most Ricoh regional websites and on the Ricoh Japan site is shown as discontinued in most configurations.

The GXR was launched in 2009 as an interchangeable lens compact digital camera system. It incorporates an imaging sensor and processing engine built into the lens unit, rather than the camera body. The lens units attach to the GXR body using a slide-in mount system.

Local distributor CR Kennedy reports that there’s been no official confirmation of the move locally, and that they have still have limited stock available in Australia even if production stops. Could be one for the collectors to snap up, especially with the APS sensor/Leica lens mount module A12 which enables the system to accept Leica M lenses.