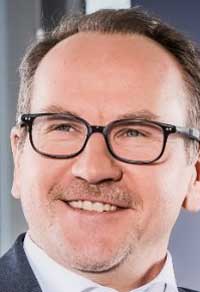 Ralf Gerbershagen (pictured right) has been named CEO of Kodak Alaris Holdings Limited, effective April 1. He will report to Steven Ross, Interim Chairman of the Board.

‘Ralf is a recognised leader in both established and growth businesses, and brings an unparalleled commitment to innovation, change and customer needs in the dynamic mobile industry,’ said Mr Ross. ‘I am thrilled that he will join us as CEO and lead the already considerable success established by Kodak Alaris since its formation in September 2013.

‘With Ralf’s leadership and experience in creating new businesses in the enterprise world, combined with our strong resources and management talent, we are well poised to lead the development of breakthrough products and services that our customers expect from the diverse Kodak Alaris businesses.’ (Sounds like Kodak Alaris still has the same hyperbole-inclined corporate affairs wordsmiths as they had in the olden days!)

Dennis Olbrich, president, of Kodak Alaris Personalized Imaging will report to Gerbershagen. Mr Gerbershagen will be based in Hemel Hampstead, UK.

Ilford ceases trading
Having declared itself insolvent and laying off most staff towards the end of last year, Ilford has now ‘stopped trading altogether’ according to CEO Paul Willems.

‘There is interest in keeping the brand and portfolio alive,’ said Willems, although it isn’t clear that there is a buyer for the business.

Fujifilm X-T1 pricing details
Fujifilm released pricing details for its new X-T1 camera this week.at a media launch event in Sydney. The camera will be available in mid-March and has an RRP of $1799, body only. Local online outlets already have the camera on offer for pre-order at $1660 – 1699 body only – a little more competitive with the US official manufacturers recommended price of US$1299. With a 18-55mm lens it’s available at US$1699, compared to advertised prices of $2299 here.

In other random pricing information (it used to come in press releases, but now you grab it where you can!), Samsung has put the US price of its NX30 with 18-55mm lens at US$999. while the Android-equipped Galaxy 2 ‘smart camera’ is US$449. No local detaisl at this stage.

Which would be slightly more exciting if the lenses were scheduled for release this year – unfortunately they won’t be available until 2015. But when they are, they will add to the two professional quality fast-aperture lenses already available for the OM-D and PEN ranges. Currently the PRO range comprises the M.Zuiko Digital ED 12-40mm f2.8 PRO standard zoom, and the M.Zuiko Digital ED 40-150mm f2.8 PRO telephoto zoom.

Also coming sometime in the future at an unknown price are two new lenses from Tamron. The 16-300mm f/3.5-6.3 Di II VC PZD MACRO (Model B016) for APS-format cameras provides a zoom ratio of approximately 18.8x.

Sigma follows its own drum

Sigma continues on its unique take on digital camera design with the Sigma dp2 Quattro, which not only has an unusually body design but the latest Foveon X3 APS-format sensor.

The Quattros will have an ISO range of 100 to 6400, and autofocus via a 9-point contrast-detection system. They will shoot in 14-bit RAW and JPEG, but there is no movie recording.

The sensor comprises three layers of photodiodes, each at a different depth within the silicon and each corresponding to a different RGB colour. Since it is the only sensor to use this superior vertical colour separation technology, says Sigma, ‘it is also the world’s only direct image sensor.’

Almost all other image sensors are mosaic sensors, which use an array of RGB colour filters in a single horizontal plane to capture colour information. Each pixel is assigned only one of the three colours and cannot capture all three colours at once. In contrast, the Foveon direct image sensor captures colour vertically, recording hue, value, and chroma accurately and completely for each pixel.

In the Foveon direct image sensor, there are no colour filters, which cause a loss of information transmitted by light. Moreover, there is no low-pass filter needed to correct the interference caused by a colour filter array. Finally, unlike the data from other sensors, which requires artificial interpolation to ‘fill in’ missing colours, the data from the Foveon direct image sensor is complete for every single pixel and requires no interpolation.

Sigma rates the APS-format sensor at 29-megapixels. No release details have been announced.