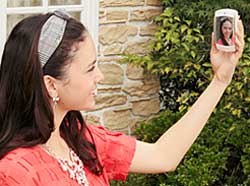 If dedicated compact cameras are becoming obsolete, what’s the chances of a dedicated camera that only takes selfies? The success or failure of the Casio MR1, or ‘Kawaii Selfie by Mirror Cam’ , will tell.

It’s a camera with the lens behind a sort of one-way mirror. So when you are looking at the mirror – and who can resist that – you are looking right into the lens rather than into a slightly off-lens LCD screen.

The Casio MR1 has a 14-megapixel sensor and a 21mm f5 lens. It has Wi-Fi for transferring images on one’s phone, a make-up mode that smooths skin tones and makes one even more beautiful, and a variety of filters and photo frames to really bring out the you in your selfies.

One down side is that mirror coating reduces the amount of light getting to the sensor. Selfies taken in dark, noisy bars will presumably be likewise dark and noisy.

It’s been launched in Asia and will retail for around $350.

Drone news
GoPro is said to be developing its own line of consumer drones with high-definition cameras for launch next year, the Wall Street Journal reports, citing ‘sources’.

The company plans to sell the new devices late next year for between $500 to $1000 each, the sources told the newspaper. Lightweight, high resolution GoPro camreras are a perfect fit for drone use.

The market for small enthusiast drones has been rapidly expanding. The main commercial drone manufacturers, DJI, 3D Robotics, and Parrot, sold roughly US$200 million worth of drones this year according to the WSJ.

Consumer drones are typically lightweight helicopters with cameras that can be controlled with a tablet computer or smartphone. US regulators so far have allowed their use by enthusiasts. 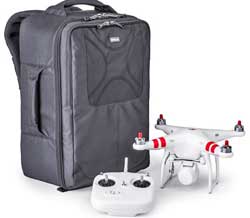 – So popular have drones become that in February photo bag manufacturer Think Tank will release ‘the most travel friendly, comfortable, and reasonably priced backpack for users of DJI Phantom 2, Phantom 2 Vision or other similar sized drones. The Think Tank ‘Airport Helipak’ will easily hold a drone plus a laptop, controller, GoPros, WiFi range extender, charger, spare rotors, extra batteries, and even a 7-inch LCD Monitor, while still complying with airline carry-on size requirements. 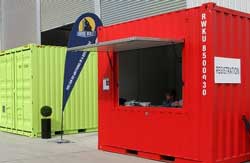 At just about every photo retail industry conference someone (usually not a retailer) will stand up and urge retailers to get out of their shops and get into local event photography. But how do you put the shingle out at an event if you haven’t got anything to hang it off?

Royal Wolf, which specialises in ‘repurposing’ shipping containers could have the answer in its range of event kiosks for hire or sale. 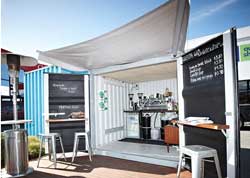 While Royal Wolf requires clients to seek a quote for a fully-configured event kiosk, the monthly hire of a 10-foot bare container is under $125 (with shipping cost in addition. Outrigth purchase is around $4000.

‘The event kiosk is proving immensely popular as they offer a practical and cost-effective turnkey solution for a multitude of uses. From retail stands to pop-up bars or cafes at festivals, sporting events, food and wine expos, product launches and exhibitions, as well as ticketing and even TV production support facilities, the possibilities are endless,’ Royal Wolf CEO, Robert Allan said. 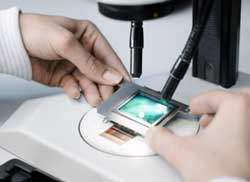 Leica German has announced an issue with white spots appearing on images taken with its flagship Leica M9 range:

‘In some cases, particularly when using the camera models Leica M9, M9-P, M Monochrom or M-E with smaller apertures (5.6-22), effects caused by corrosion of the sensor glass may be encountered. Leica offers a free replacement service for the CCD sensors of cameras affected by this problem as a goodwill arrangement. This goodwill arrangement applies regardless of the age of the camera and also covers sensors that have already been replaced in the past. Customers who have already been charged for the replacement of a sensor affected by this problem will receive a refund.

‘…The marks on images mentioned earlier are related to the properties of the CCD sensor. The sensors are equipped with a specially coated IR filter cover glass to ensure optimum imaging performance. Should this coating layer be damaged, corrosion effects that alter the filter surface may begin to appear after several years.

The effect described does not affect the CMOS sensor of the Leica M (Typ 240).