Samsung in the US, UK and other markets has announced a slim, lightweight new interchangeable lens camera, the NX Mini, with an all-new lens mount. 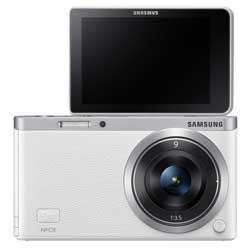 (We were told by Samsung Australia: ‘In relation to your enquiry, we do not have news regarding the release of NX Mini Camera. It’s best to check our website from time to time.’)

Samsung says the new NX Mini is the thinnest and lightest interchangeable lens compact in the world, and it’s aimed at the smartphone generation.

The screen can be flipped up above the camera for those all-important selfie shots.

Existing NX lenses can be attached via an accessory adaptor.

The NX Mini might be available in a range of colours – white, pink, green, brown and black.

COMMENT: Is Samsung fair dinkum about selling camera in Australia? While in other developed markets online retailers are taking orders and camera reviews have already been written and published, there’s not a peep out of either Samsung or its PR consultancy, Edelman, on what looks like quite an interesting new camera and three new lenses. It’s not every day an all-new lens mount is announced (thank goodness!) but as far as I’m aware, Samsung hasn’t even scheduled a media launch for the NX Mini. The Australian market is not some kind of sleepy backwater. It’s difficult not to conclude that Samsung’s camera division is a bit on the dozy side, though!