PMA Conference: Specialists have the passion

Whether it was a Camera House conference or a PMA conference didn’t seem to matter in terms of the retailers attending – there were plenty of familiar faces from previous industry events, leading to the oft-heard lament that those who could really benefit from attending industry conferences seldom do.

Numbers did seem slightly down both for a PMA event and a Camera House AGM (based on my one experience last year) but there was a positive buzz. I’m told that Camera House has performed well over the past 12 months, with good sales results and rebates flowing back to members.

The trade exhibition area was cramped, overcrowded – and busy! Exhibitors with table tops groaning under the weight of featured products flowed out onto the balcony. But while most suppliers had two or three metres of table top upon which to strut their stuff, the ProMaster portfolio had an entire room to itself. As one trade exhibitor noted with some foreboding, these are different times, with some suppliers doubling as retailers and retail groups also taking on the role of distributors. Nonetheless, ProMaster most probably contributed to that positive Camera House result.

In the main exhibition space the 28-megapixel Samsung NX1 was on show in Australia for the first time and discussions with Samsung executives indicated they would be working to align Samsung’s image as a camera maker with the impressive capabilities of its cameras. At the other end of the scale, the 20-megapixel Samsung Galaxy K zoom gives photo retailers a step into the smartphone category. It’s on sale at Camera House for $649. 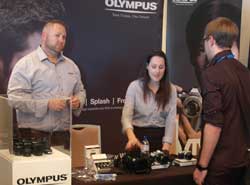 Fujifilm had an interesting machine on show which bonds various one-sided media together -from silver halide to inkjet and thermal – to create double-sided printed products such as photo books.

I skipped the Saturday as it was ‘Schools Photographer’ day and returned for the Sunday PMA conference session. I suspect I wasn’t the only one to do so, and there’s been discussion of concentrating the conference over two days next year, with a trade exhibition component on the Saturday. 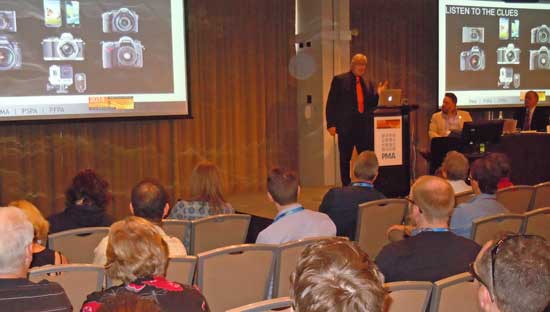 It was good to see a large number of Camera House retailers backing up after their own, dedicated conference to swell the numbers for the PMA component. If this hybrid event is going to work as a concept, the groups involved have to see some value in participating. All sessions through the day were well-attended.

The day started off with those consummate performers John Swainston and Bill McCurry. They presented a smorgasbord of retailing tips drawn from examples from around the world – not all from the photo channel – which had attracted their retail enthusiast eyes by innovating successfully or simply doing something particularly well – such as the retailer in the middle of the highly-competitive Sydney camera store precinct which has developed its frames business to have the largest range in NSW.

Examples of retailing awfulness and retailing wonderfulness from around the world were used to illustrate the points being made.

John Swainston looked at bike retailing, another channel hit hard by parallel importing and online sales. He showed how bike stores have migrated to clothes, accessories, service and training. He also showed a ‘house brand’ bike – ‘Specialized’ – being offered as a bike store-exclusive brand – not unlike Camera House’s association with ProMaster.

Bill McCurry made the salient point that a retailer can be successful in a weak market, showing research that 30 percent of companies with top shareholder returns came from slow-growth segments.

‘In weak markets, market strategy rules. Those who deploy what they do best in the best way win.’

John Swainston said that ‘most of us are not selling the dream, we are selling boxes’ and urged retailers to move away from a focus on specifications, technology and price, to the magic of photography.

The Suppliers
The second presentation started with the suppliers on the panel giving short introductions to their companies – by which time the session was about half finished!

James Murray (Nikon) chaired, and started off by asking a question: There are two parts to the industry, he said, one is ‘hell-bent on protecting what they’ve built over the last 20 or 30 years, and then there’s another group that see the opportunity to invest and build new business, new wealth for the next decade. Which part are you in?

‘Because certainly from the supply side we want to help you build a stronger business for the next decade…On the sporting field if you try to protect a lead it falls apart.’

Michaela Lawrence from Fujifilm noted that according to a recent industry report, printing, including photobooks, is back in growth again.

Stuart Holmes IIPS) pondered whether the theme of the session – ‘what suppliers seek from specialty retail partners’ should perhaps have been the other way around. He made the point that the silver halide quality monitoring and custom profiling for wide-format were services IPS offered to give photo specialists an edge in image quality compared to non-specialist competitors.

John Swainston identified flashguns as a specific accessory category which ‘needs improvement’ in Australian photo retailing, with a low ratio of 1 flash sold for every 17 cameras, compared to the US ‘attachment rate’ of 1 in 5.

The session did indeed take on a ‘what can suppliers do’  flavour when the forum was opened up to questions. One retailer was seeking supplier support in the form of having supplier presentations to customers at her store. They said ‘Yes’.

‘iPhonography’ (why not ‘smartphonography’?) was identified as a new opportunity and several retailers were interested in discussing ways to moving people from iPhones to photography.

‘I don’t see a strategy from camera manufacturers to migrate people from iPhones into cameras , so what I want to see is an industry that educates consumers,’ said one retailer.

Michaela Lawrence said that with pictures from iPhones the industry was ‘at the brink of a whole new market’ and after the task of educating customers on photos from digital cameras the new message needs to be that you can get photos from your phone.

Stuart Holmes noted that the the IPI marketing group recently launched a full iPhonography course, including Powerpoint presentation, speaker notes and promotional collateral which would be ideal for retailers running courses as part of their businesses.

Both the Fujifilm and Kodak (IPS) representatives put in plugs for their respective photos-from-smartphones apps.

Joe Tizzone from Olympus offered an admission that one of its earlier campaigns aimed at smartphone users – ‘Get a Real Camera’ – was probably not the right approach. More recently an Olympus-sponsored educational event with a famous iPhone photographer was more effective in engaging with iPhone photography enthusiasts.

The difficulty customers have with photobook software was another issue nominated by the audience: ‘When are photo books going to become real easy to make?”

Michaela Lawrence said the latest Fujifilm kiosk software offered an automatic photobook creation capability. There was also an upsell feature which builds in the background as a customer places an order. As a result, she said, ‘Photobook sales have really sky-rocketed.’

Joe Tizzone concluded the session by observing: ‘Photo retailers are best positioned to embrace what’s happening in our market. Yes there are CE and others in the category who are quite aggressive with pricing, but they don’t have the knowledge or expertise. They have corporate objectives that they need to achieve, whereas you do have the knowledge, you do have the expertise – you have the passion.

‘A lot of you have come into this industry because you are passionate about photography and about the industry. I think that you are in a great position to embrace the opportunities, and success for us would be working with you to achieve those objectives.’

– PMA Conference report to be continued…