Canon Australia has announced the 65x PowerShot SX60 HS digital compact, which will be available in Australia mid-October with street prices from $614 (DCW).

The camera has a focal range equivalent to 21-1365mm, a 16-megapixel CMOS image sensor and DIGIC 6 processor. The camera’s 1080/60p Full HD video capabilities feature the choice of automatic or manual exposure control together with a built-in stereo microphone and a port for optional external stereo microphone.

It has built-in Wi-Fi and a ‘mobile device connect button’ to connect to a compatible smartphone or tablet. It also includes NFC.

The SX60 HS camera features Canon’s Face Detection and Tracking AF system plus full resolution continuous shooting up to 6.4 frames per second (when not using Tracking AF). It has both a 3-inch, 922K dot Vari-Angle LCD screen and an electronic viewfinder.

Then  things get confusing: ‘When shooting at extreme telephoto focal lengths, the Zoom Framing Assist function remembers the user’s previous zoom position, zooms out to locate the subject, and zooms right back into the saved position when the button is released. An additional feature to this Zoom Framing Assist allows users to preset a desired composition such as whole body, upper body or face. Once this feature is enabled, the PowerShot SX60 HS camera will zoom its lens automatically to maintain the desired composition even if the subject moves closer or further from the camera. Another new function called Zoom Memory makes it possible to quickly return to the most recently used zoom position, even if the battery or memory card is replaced.’ OK?

The PowerShot SX60 HS camera also features full-manual exposure and focus control, with the photographer’s choice of JPEG, RAW, or JPEG+RAW capture modes. It has a hotshoe and takes Canon EX-series Speedlites. 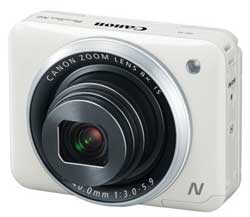 Also announced at Photokina, although apparently not included in the local press release bundle, was the PowerShot N2. The N2 (US minimum advertised price, US$299) has WiFi and NFC, and a 2.8-inch, 180 degree tilt, capacitive touch LCD screen.

The new shutter ring on the PowerShot N2 camera now functions with an all-round release, allowing users to hold the camera in various ways.

Creative Shot mode…yadda yadda….Retro, Monochrome, Special or Natural filters… combine several movie clips automatically with special effects ….and Smart Auto Mode, ‘so no matter the shooting situation users can expect that their photo or video will be captured just as they imagined.’

The Powershot N2 won’t be available until December.