Canon has announced the Powershot G7 X, its first compact camera with a one-inch (mid-sized) sensor. It will be available in Australia in October. Local online pricing is from $798. (US minimum advertised price is US$699.) 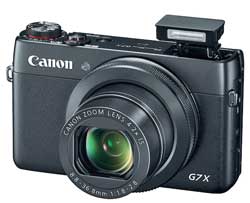 The 20-megapixel CMOS sensor has an ISO range of 125 – 12,800. The G7 X also features a 4.2x optical zoom lens (equivalent to 24-100mm), together with a maximum aperture range of f1.8 to f2.8. The lens features a nine-blade curved aperture diaphragm to provide attractive bokeh. A multi-angle (up to 180 degrees) three-inch capacitive touchscreen LCD has 1,040K-dot resolution. It doesn’t have a viewfinder.

The camera has 31 AF points, spread widely across the picture area, and continuous shooting speeds up to 6.5 frames per second. It’s equipped with built-in Wi-Fi technology and, using the Mobile Device Connect Button, users can connect to a compatible smartphone or tablet easily. The G7 X camera also features NFC making initial setup and pairing easier with a compatible Android device.

Video shooting is at Full HD – 1080/60p. Most controls can be accessed via the touch screen, a dial on the back of the camera or a control ring on the lens. There’s a HDMI port for connection with a HDTV. .

There’s a plethora of scene/shooting modes – there are four options to capture images of starry night skies, for instance. It supports both manual exposure control and a choice of RAW, JPEG or RAW+JPEG recording formats.