Phase One, Pentax switch to CMOS for medium format

Major players in the medium format camera market all at once seem to have decided to adopt CMOS sensor technology in their latest releases. 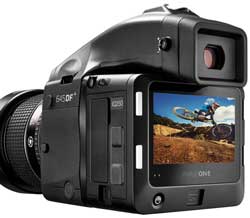 Following on from Hasselblad’s 50-megapixel CMOS camera announcement, Phase One has flagged the IQ250 (pictured right), the first CMOS-based medium format digital camera back, and Ricoh has now announced that they will show a CMOS-equipped ‘Pentax 645D 2014’ at the forthcoming CP+ show in Yokohama.

Like the Hasselblad H5D-50c and the Phase One IQ250, the new Pentax camera will carry a 50-megapixel CMOS sensor. CMOS sensor technology should deliver improved low light/high ISO results where CCD sensors can produce excessive noise. An early test of the Phase One back by US pro werbsite PDN ‘proved that a medium-format system with a CMOS sensor can capture high ISO images that look as clean and crisp as those from some full-frame DSLRs.’

Phase One claims the IQ250 has a huge dynamic range of 14-stops.

‘We are very proud to introduce the Phase One IQ250, which carries on the tradition of Phase One high-quality medium format gear,’ said Phase One CEO Henrik O. Håkonsson. ‘The wider ISO range in this new CMOS-based system, for example, illustrates our desire to continue pushing the envelope for our customers, to help them succeed in all of their unique imaging challenges.’

Phase One claims the IQ250 has the widest ISO range of any medium format camera system, spanning from 100 to 6400. Photographers can set the exposure time anywhere between 1/10,000s to one hour.

With a sensor size of 44x33mm, the camera back offers 68 percent more image-capture area than a full-frame 35mm DSLR camera.

Local distributor L&P has ordered demonstration units (not yet arrived) but currently doesn’t have local availability and pricing details. US pricing starts at US$34,990.

The new Pentax will have a tilting LCD screen to help photographers compose shots from difficult angles. According to Ricoh, the Pentax 645D 2014 will be faster to use overall with “a high-speed response in a variety of photographic applications.”

Ricoh also announced it will unveil a new ultra-wide zoom lens for the 645D at a later date. Pricing has not been revealed – there’s not even a pitcure of the new camera at this stage – but the camera is set for launch around the second quarter of 2014. The current 40-megapixel 645D is priced at $7995 (incl GST).