The clear leader in smartphone cameras – the 41-megapixel Nokia Lumia 1020, earned an undistinguished ranking of 222 in a field of 242 when DxO bench-tested its sensor against dedicated digital cameras. 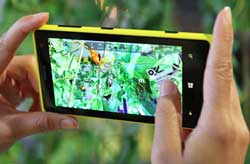 When DxO tests a smartphone camera it is usually in against other smartphone models, but the Lumia 1020 was scored using the same system as a dedicated camera.

With a DxOMark sensor score of 41 points, the Nokia 1020 delivered pretty ordinary performance compared to most dedicated cameras. However, it was severely marked down in low-light performance in particular, with an ISO of just 135. By other measures it didn’t perform too badly: colour depth is 20.2 bits, while dynamic range is an impressive 10.4 Ev.

In fact that raw score of 41 gives the 1020’s sensor a similar score to the Panasonic FZ70 and the Canon S130. The ranking of 222 in a field of 242 is a little deceptive in that DxO tends to look at higher end cameras more frequently.

DxO’s conclusion: Nokia’s use of a relatively large (6.6 x 8.8mm) BSI CMOS sensor in the Lumia 1020 is a contributing factor regarding performance, however, compared to the best-in-class digital compact cameras, its capabilities are still restricted in low light or when high ISOs are used. It’s also worth noting that we’re not taking lens performance into account in this review, which is clearly an important determiner of image quality. Be that as it may, the fact the sensor performance of the Nokia 1020 is on a par with certain current compact cameras at low ISOs is particularly revealing; whatever your personal feelings are regarding the smartphone, it shows remarkable promise.

Another comparative test on the Lumia 1020, by DPReview, compared its zoom performance to the 5x Canon S120. The result: The Lumia 1020’s digital zoom simply can’t stack up against the Canon S120’s optical zoom. The Canon can not only zoom in further, it also retains detail and sharpness better when zoomed in to its full 5X power.

– Which would all be fine if snapshooters gave a hoot or two about image quality. The convenience of a camera at the ready all the time is clearly winning the mass market battle against sharper, better pictures.