The pre-Photokina jostle for editorial space continues with Sony unveiling two ‘lens- cameras’ for smart devices, its smallest Action Cam Mini and an update to its PlayMemories Mobile smart-phone app.

The latest unique-to-Sony lens-cameras connect the camera to a smartphone via Wi-Fi or NFC, with faster hook-up times with its own Xperia phones. They are controlled via Sony’s free PlayMemories Mobile app, which features a new user interface that is simpler to use and makes one-handed operation easier. On-screen gridlines have been added, while GPS data can be imported into images from the phone. Users can trigger the camera’s shutter from the touch-screen; and automatically transfer shots to sharing websites.

The ‘body-only’ QX1 model has a 20-megapixel APS-C size Exmor sensor, BIONZ X processor and advanced camera features. It works with both E-mount and A-mount interchangeable lenses. Shooting options include a Superior Auto mode with scene recognition and raw file capture. The camera also includes a pop-up flash and ships with free angle shooting kit for selfies and low/high angle shooting. An optional case and strap kit is available in a brown leather-look finish.

The QX30 comes with its own 30x optical zoom lens (24-720mm equivalent), aided by Optical SteadyShot image stabilisation. It has an effective resolution of 20-megapixels and BIONZ X processor. Other features include Lock-on AF and continuous shooting at up to 10fps plus the ability to record Full HD video at a 60p frame rate. US pricing is ‘around US$350, while the QX1 ‘body’ is US$400.

The already-released QX10 will be available in two new colour variations – pink and copper – as well as black and white. 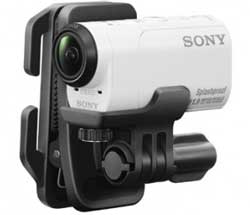 Bundled with the camera is a new RM-LVR2V Live-View Remote, which can be wrist-mounted or attached to bicycle handlebars and has a screen that can be used to control up to five cameras. The remote also logs GPS data and transfers it to images. It can also be used to stream live video to sharing sites like USTREAM and enables users to send a message via SNS when starting the live streaming. US pricing is reported to be ‘around US$250’.

The new models are scheduled for release from October. PlayMemories Mobile Version 5.0 for iOS and Android is available now for free download from Sony’s websites worldwide.