Macphun Software, a photography software developer with over 20 million users worldwide, has appointed CR Kennedy & Company as its Australian distributor.

This is the first time Australians have had local access to products and services offered by Macphun Software, which has established an Australian website www.macphun.com.au with CR Kennedy.

CR Kennedy will be carrying all Macphun products on high-speed SD cards at retailers in Australia, and will also support electronic software downloads (ESD). The firm will also be the first line of support for photographers in Australia using Macphun Software products. 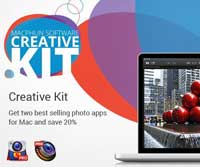 ‘Macphun products will now be on the shelves in places that they’ve never been before and in the hands of countless new customers, thanks to CR Kennedy’s top distribution networks,’ said Paul Muzok, CEO of Macphun Software. ‘This new relationship means that even more photographers achieve the best results possible with their craft.’

Macphun Software develops award-winning mobile and desktop apps and technologies for the consumer photography and professional digital imaging markets. It was established in 2008 with a mission to create innovative iOS apps. Macphun’s products such as ColorStrokes, Snapheal, Intensify, Focus 2 and Fx Photo Studio consistently rank among the Top 10 in the photography category on the Mac App Store.

‘These products are destined to become a “must-have” in the toolbox of photographers of all skill levels.’