Samsung Electronics has announced a new mirrorless interchangeable camera, the NX30, and two 16-50mm lenses, as well as an upgraded Android ‘smart camera’, the Galaxy Camera 2. 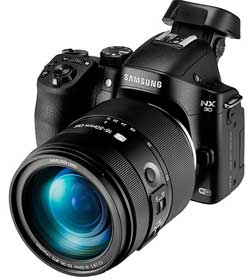 The NX30 has a 20-megapixel APS-C CMOS sensor, and a new EVF module that tilts upwards to approximately 80 degrees and boasts 2,359,000-dot resolution. Its 3-inch monitor uses Super AMOLED technology and it able to be moved from side to side up to 180 degrees, and upward and downward up to 270 degrees. It also provides an array of touch controls.

The NX30 also features NFC and Wi-Fi capabilities, and the ‘Tag & Go’ function lets users tap and share memories instantly and easily, via NFC-enabled smart-phones and tablets, while Photo Beam enables images to be transferred between devices by NFC.

MobileLink lets users select multiple images to send to up to four smart devices at one time and AutoShare automatically sends every photo you take instantly to a designated smart-phone or tablet. The Dropbox web storage service is pre-loaded on the NX30 in selected regions. Flickr is also supported in some regions. The Remote Viewfinder Pro function enables the NX30 to be controlled from a smart-phone’s screen. Users can zoom and snap shots remotely and also adjust shutter speed and aperture, while framing the shot on the smart-phone’s screen.

Two dedicated Custom Modes can be accessed on the mode dial and a separate drive dial also provides instant access to a selection of popular modes, including continuous shooting, bracketing and self timer.

Samsung Australia is tight-lipped about local pricing and release date. Overseas reports seem to indicate availability will be early in the second quarter of the year. 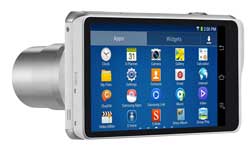 It features an an upgraded 1.6GHz Quad Core processor and improved battery life.
(2000mAh), and a 16-megapixel BSI CMOS Sensor and a 21x zoom lens.

The processor is supported by 2GB of RAM, and internal memory is supplemented with
the pre-loaded Dropbox app, providing 50GB of free cloud storage for up to two
years.

Along with Dropbox connectivity, the Galaxy 2 also shares Wi-Fi and NFC capabilities with the NX30, along with the Tag & Go and Photo Beam features.

The Galaxy Camera 2’s 121.2mm (4.8-inch) HD Super Clear Touch LCD is a huge advance on the 3-inch screens on most compact cameras.

The 28 different pre-set modes include a Smart Mode Selfie Alarm, which takes five
consecutive, high resolution images so that users can select their best angle and share immediately on their favorite social media site.

Videos can also be given a unique twist with features such as Multi Motion Video, which allows users to set the speed of capture and create speed up or slowed down movies, ranging from eight times slower than normal speed up to eight times faster.

Once again, no local release details are available at time of publication.