Ricoh Imaging has announced the Pentax K-S1, a new mid-level DSLR with a distinctive design and a ‘flat field’ user interface. 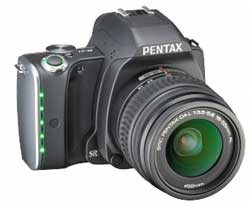 The camera’s ‘flat field’ user interface integrates a back-lit LED selection dial, four-way navigation, and a 3-inch 921,000 dot LCD – instead of the knobs and buttons found on other DSLR cameras.

The K-S1 ‘is designed to attract a mid-level customer who is accustomed to a mobile interface and is looking for a similar interaction in a DSLR.’

The optional Flucard for Pentax offers additional features such as Wi-Fi transfer, wireless live view, and remote capture control; letting users take control of their camera settings with a smartphone, tablet, or computer and save images directly to a mobile device.

The US press release stated that the K-S1 comes in three standard colours: black, blue, and white. In addition, two separate colour collections are available; The Fabric Collection, containing four colours such as cotton beige and tweed gray – and the Night Sky Collection, with five more colours like Sunset Orange, Dawn Purple, and Midnight Black.The new camera is scheduled for release from September, with the US MSRP price listed at US$799.95 for the camera plus 18-55 mm lens or US$749.96 for the camera body alone. Given CR Kennedy continues with its unique policy of delivering Pentax cameras into the local market at around parity to the US, Australian pricing should be somewhat similar, although local pricing and other release details have yet to be revealed.