New CMOS back for vintage ‘Blads

August 4, 2014
CR Kennedy and Company will release a new CMOS sensor-based digital back – the CFV-50c –  designed to work with almost every Hasselblad V-series camera made  since 1957 – early in September. 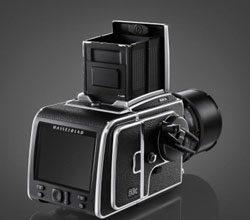 The release of the new back potentially returns thousands of film-era ‘Blad bodies back into circulation with 50-megapixel CMOS performance.
The CFV-50c digital back is styled in exactly the same way as V-system film backs – with the addition of buttons and a 3-inch display. In all other ways it matches the style of a V-system body.
‘We have experienced a substantial resurgence of interest in our iconic V cameras – users love the traditional ergonomics and the unique appearance,’ said Hasselblad CEO Ian Rawcliffe in announcingthe new back.
‘Our research has shown that although we no longer manufacture V models, there is a big demand from our dedicated V System users who want to be able to continue to use their classic cameras but also desire access to our latest technology.
‘The new CFV-50c, with its supreme image quality, is our response to that demand. Photographers using V System vintage cameras can now realise the true potential of these definitive capture devices.’
The CFV-50c will have a local RRP of around $18,000 including GST. It has the same functionality and performance levels as the latest-release H5D-50c camera, including extended ISO capability, according to Hasselblad.
Key features include the 50-megapixel CMOS sensor with ISO up to 6400; a large, high resolution LCD screen; a higher frame rate than earlier CCD-based CFV backs; Live Video in Phocus in colour; a remote control option from Phocus using a 500EL-type or 503CW with winder; a new menu system and button layout; 90 degree viewfinders – photographers can use the PM90 and PME90 viewfinders for easier portrait or vertical shooting – and a 12.5 megapixel JPEG option in addition to RAW file capture.
It outputs 3FR raw files with 16bit colour to a CF card (or directly to a tethered computer.) At a size of 43.8×32.9mm, the sensor has a crop factor of 1.45x compared to 6×6 medium format film.
No external cables are required to operate the CFV-50c.