Sony Australia has announced June availability of the latest version of its highly-acclaimed large-sensor digital compact range, the Sony Cyber-Shot RX100 III, at an RRP of $1099. 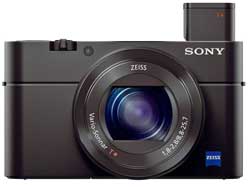 The 1.44 million dot OLED electronic viewfinder pops up from the camera’s top panel. (A downside of this design is that there is no space for a hotshoe – but there is a pop-up flash.) The ‘finder has a Zeiss coating, which Sony says reduces reflections and improves clarity.

Sensor is 20-megapixels and the size is what Sony calls a ‘1.0 type’, and is sometimes called a ‘1-inch’. Neither of these descriptions has anything do do with the actual size, which is 12.8mm x 9.6mm, or 16mm on the diagonal. If only they could tell you that means it has over five times the surface area of a standard 1/2.3-inch compact camera imaging chip – but that would be too much information, one assumes! (It’s been noted elsewhere that Sony has managed to build the large sensor into a camera not much larger than the tiny-sensored Canon S series.)

The humanity-defining selfie has been facilitated via an articulated ‘3.0-type’ (which means 3-inch) LCD that flips up 180 degrees ‘for effortless arms-length portraits’ (and, almost as an aside ‘is also very useful for shooting from either high or low positions.’)