Fresh 2014 research on how consumer electronics companies treat manufacturing workers saw most of the photographic-related companies surveyed sitting towards the top end of the ratings. 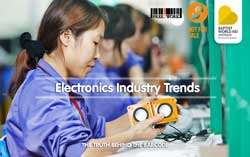 The research is the second in the ‘Behind The Barcode’ series, with the first looking at garment manufacturing.

Nokia was found to be the only electronics company out of 39 looked at which demonstrated it was paying workers sufficient wages to meet their basic needs in countries like India and China.

The research was conducted by international aid and development organisation, Baptist World Aid Australia in conjunction with Not for Sale, a US anti-slavery campaign, and partly funded by the US Department of State and the International Labour Rights Forum.

Public interest about how consumer electronics devices are made has been spurred by the rise of super brands like Apple and Samsung, combined with growing public concern about exploitation and child labour in Chinese electronics factories, and fears about the use of conflict minerals sourced from the Democratic Republic of Congo (DRC).

The Electronics Industry Trends Report graded the labour rights practices of 39 electronics companies and some local brands like Dick Smith and Woolworths, and found no company achieved an A grade.

Nokia was the overall best performer, with a B+ grade and a demonstration that they were paying workers a living wage. Apple, LG Electronics and Microsoft also earned B+ grades., while Australian brand Kogan received a D- as did Canon; and Hisense and Palsonic (‘proudly Australian-owned’) came in at the bottom of the list with F gradings.

Among photo industry brands, Panasonic (B), Samsung (B), and Olympus (B-) were all in the top third. Sony was rated a C, SanDisk a C-. Canon’s D- placed it in the bottom quarter of the index. Nikon and Pentax were not included in the research.

The detailed grading in the report investigates systems companies have in place to ensure worker rights in their supply chain, protecting them from exploitation, forced labour and child labour.

The grades have been condensed into an ‘Ethical Electronics Guide’, which provides consumers with a pocket sized tool to use on the go. It includes the overall grades companies scored, and whether they guarantee workers a living wage.

The research revealed that 97 percent of companies – all bar one – were unable to demonstrate that they were paying their workers wages that were sufficient for them to live on.

The CE industry is commended in one stage of assessment, with the report finding that 49 percent of the graded companies, including many of the sector’s largest brands, knew almost all of their suppliers at the final stage of production. However, the report found that deeper down the supply chain, at the raw materials level, no company had complete knowledge of where their materials were sourced.