A recent US report report, the Custora E-Commerce Pulse Mobile Report, based data from over 100 online retailers, 70 million consumers and US$10B in transaction revenue, explores the shift to smartphones and devices and looks at how it’s impacting the way people shop online. 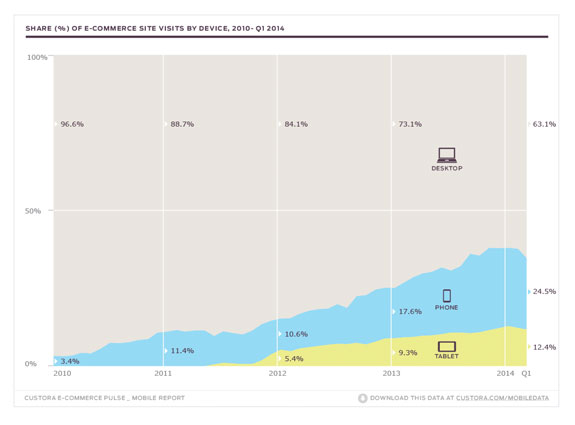 On of the more interesting findings is that mobiles and email marketing is a potent combination, but mobiles and social media – not so much.

The report’s findings include:
– US mobile e-commerce is a US$40 billion market, poised to hit US$50 billion in sales in 2014. In the past four years, the mobile e-commerce market grew 19-fold: From US$2.2 billion in 2010 to US$42.8 billion in 2013. This represents 1875 percent growth over these four years, and 111 percent Compound Annual Growth;
– More than a third of visits to online stores now come from mobile devices (phones and tablets);
– By the end of Q1 2014, 37 percent of visits to online stores came from mobile devices. That’s up from just 3.4 percent at the beginning of 2010.
– Apple is slowly losing its dominance in e-commerce. Over the last two years, iPhone’s share of e-commerce orders done on mobile phones went down from 75.1 percent in 2012 to 50.6 percent in Q1 2014. Samsung phones have more than quadrupled their share of phone orders over the same time period — growing from 6.9 percent in 2012 to 30.5 percent in 2014.
(So for the photo industry, Android apps – or alternatively, access via HTML 5 –  for online ordering become an ever more critical part of the photo retailng equation.)
– iPad still accounts for the biggest share of tablet e-commerce orders, though the share of orders made from Samsung tablets increased from 1.9 percent in 2012 to 15.3 percent in Q1 2014. Amazon has also quickly become a player in the US, with purchases made on Kindle Fire tablets now accounting for 4.5 percent of all tablet orders. Amazon recently announced a smartphone, the Amazon Fire Phone.)
– Email Marketing drives mobile purchases – social media doesn’t. Customers responding to email marketing and shoppers going directly to e-commerce sites (including app traffic) accounted for the highest share of purchases on phones. Email marketing generated 26.7 percent of sales on mobile phones, compared to 20.9 percent on desktop, and 23.1 percent on tablet. Social media accounted for only 0.6 percent of sales on phones and 0.2 percent on tablets.