Brendan Waites is intelligent, relatively young and when Photo Counter spoke to him last week didn’t seem to be at all delusional. Yet a year ago he opened a specialist photo store. 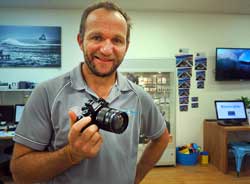 – And he didn’t just acquire an existing business, but opened up a brand new store, Ocean Grove Camera and Photo, in the coastal retreat of the same name (population around 10,000) about 20 minutes drive from Geelong on Victoria’s beautiful but seasonal Bellarine Peninsula.

‘I saw a need for it,’ he explained. ‘I’ve been in the industry since 2003 – so about 10 years. I noticed on this side of Melbourne there was a hole in the marketplace. After Werribee there is no camera specialty store (besides Roydhouse Camera House in Geelong, where Brendan was until last year store manager).

‘JBs and Harveys have some expertise, but they aren’t camera specialists…

‘I also noticed a lot of Bellarine Peninsula customers coming into Roydhouse Camera House, particularly from Ocean Grove. It seemed that every second person was from around here so I’d jokingly mention that I was thinking of opening a store.

When the joking mentions received encouraging replies, he started to think more seriously about the possibilities.

‘That was part of it, and about 18 months ago I had the means to do so, so I approached Bendigo Bank who were absolutely brilliant, though a little hesitant, but agreed to giving us the funds to get started.’

Having been through a full 12-month cycle – he opened June 1 last year – Brendan is confident that he has a going concern.

– Which makes a lie of assumptions that the days of the specialist photo store are numbered, no-one prints anymore, everyone’s going online – the whole self-defeating tragedy.

‘I see potential for what I do here in a lot of regional areas,’ Brendan said, ‘If you do it with passion and enthusiasm….

‘Business is good,’ he said. ‘Christmas here is not just Christmas but a two-month hit. And it’s not just cameras and lenses (of which Ocean Grove Camera and Photo stocks a wide range of top brands) but accessories like memory cards and camera cases that people on holidays have lost or forgotten or broken.’

But it’s not just a two month feast followed by a long fallow season. Locals have also supported the store.

‘…My worst nightmare would have been to open this store and have nobody turn up,’ he told the local newspaper, The Surfcoast Times in an article marking his first year in business. ‘Well I can say with great pride that the exact opposite is the case.

‘So thank you to all our loyal customers and to those who I know will soon become customers.’

In addition to over 10 years behind the photo counter, Brendan is also a professional landscape photographer, and made his living from that before his time in photo retailing.

‘I sell landscape prints in the store and that also gives me leverage as well – people ask me, “so what did you shoot that on?”.’

And having that practical knowledge of picture-taking, combined with an enthusiasm and obvious passion for photography, has made running ‘how-to’ workshops an obvious step.

While coastal towns like Ocean Grove can easily treble or quadruple their population over the holiday season, things can get awful quiet through the winter months, leaving locals with plenty of time on their hands. So getting together with a few like-minded people from the same community once in a while to be taught something new beats MasterChef hands down. That there’s a good proportion of retirees probably doesn’t hurt, either. 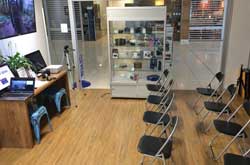 Ocean Grove Camera and Video had over 200 (from ages 12 to 92) attend a recent entry-level SLR workshop.So now there are plans for an intermediate SLR workshop, one on natural light portraiture, flash photography, macro, weddings, landscape/seascape, long exposure and underwater photography…

‘The workshops are very rewarding – it’s still a buzz to see when a customer finally works out just what their camera is capable of.’

Prints still charming
The printing side of the business has been buoyant as well, with a new duplex-capable Noritsu QSS Green lab firmly on the wish list to replace the ‘pre-loved’ Noritsu D703 ‘that just keeps running. We can’t fault it really, it just cranks it out all day.’

He also runs an Epson 9800 wide-format, ‘so it’s a completely dry lab’, with film processing out-labbed on a three-day turnaround.

‘On the printing side there is clearly a gap in the market,’ he said. (There are no Big Ws and the like in Ocean Grove.) ‘We’ve done a lot more printing than I would have expected.’

He has adopted the Dakis Photo Solutions system as the store’s printing software platform after a recommendation from Victortian IPS and Film & Video rep, Linda Nakavelu.

‘It’s absolutely state of the art. In store the kiosk is basically a 24-inch touchscreen tablet. People love it. They say it’s the best system they’ve used.

‘It delivers total connectivity and also gave me my online presence. And I find if I direct people to my website on the phone, they do more than they would in store.

With Dakis, the obligatory visit to the ‘App Store’ to download enabling software for printing from mobiles and tablets is eliminated. And the software on the kiosk has the same look and feel of the software on the home PC, as on the smartphone or device. (See last week’s story on Fotofast.)

While the website is basically an entry point to online ordering, Brendan has put a lot of effort into establishing a Facebook presence, and the Ocean Grove Camera and Photo Facebook page boasts 2000 Likes.

‘It’s image-rich so it suits this business,’ said Brendan. He mixes a bit of selling and store events (for example, Olympus is coming out next week to talk about underwater photography) with the odd joke, community information (the next Farmers Market, for instance), and some appealing imagery. The successful workshops are only promoted through Facebook, which indicates it’s working for him on more than one level.

He says there’s not a lot of product promotion on the website, because to a certain extent, it’s not necessary. ‘I don’t really need to. People come into the store.’

Still, with a killer URL like ‘cameraandphoto.com.au’, it seems a shame not to make the most of it.

‘I know! I almost fell off my chair when I saw it (‘Camera and Photo’) was available. It says just what we do.’

The people you know
Having established contacts in photo retailing was a help in the early weeks and months, with a range of reps offering assistance in getting the new business up and running.

‘Olympus has been hands down the best camera supplier – absolutely phenomenal. The local rep, Brett Cook, is amazing. And I repay that. I use Olympus myself.

‘The red and yellow guys haven’t exactly been beating down my doors. Nikon gave me an account. Canon…not so much. I haven’t had a rep from either in the store.’

– Which doesn’t seem like something which will keep Brendan Waites awake at night. New ideas for Ocean Grove Camera and Photo, and maybe even dreams of new Camera and Photos in other towns, maybe…